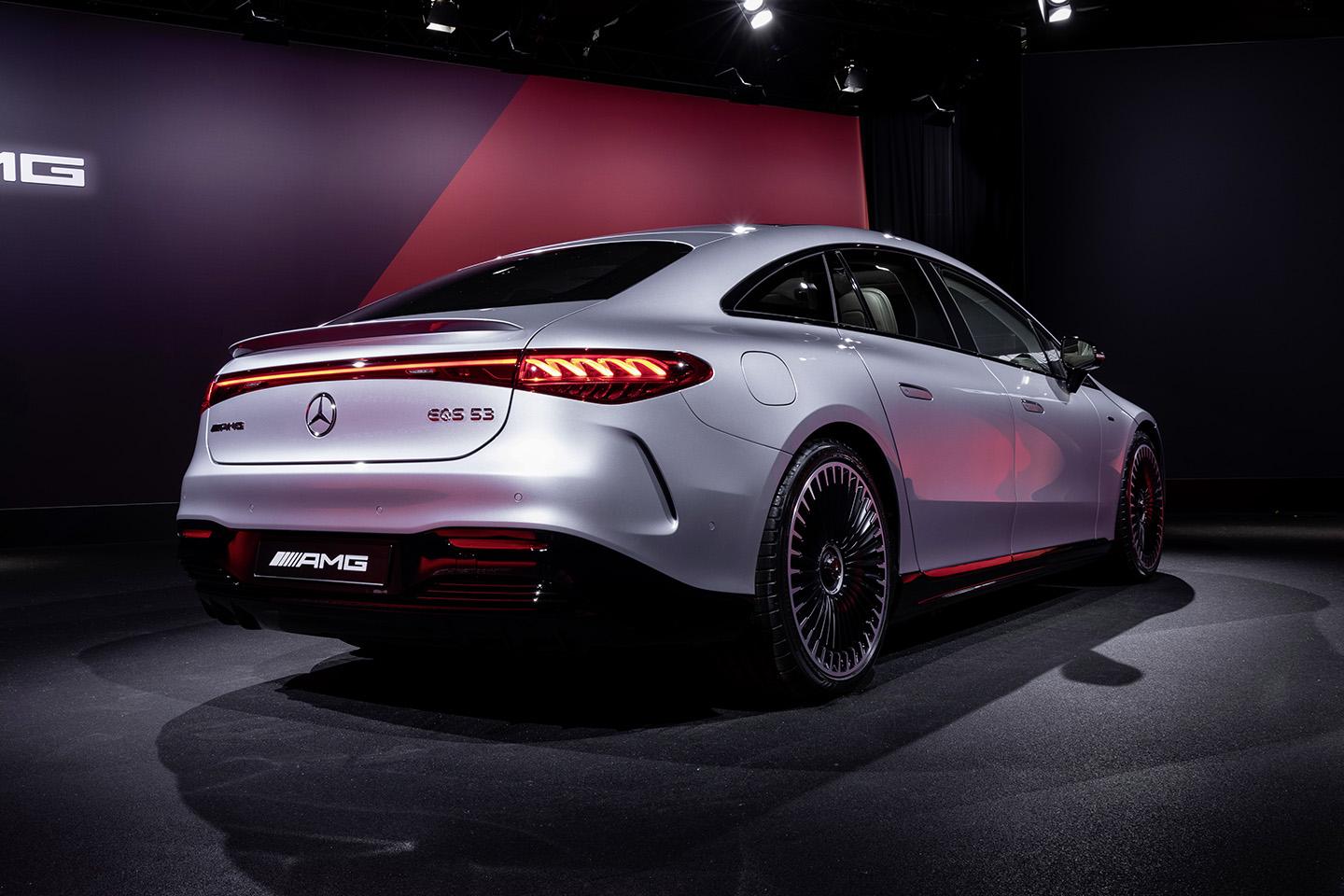 Traditionally there's a significant gap between a carmaker's first plug-in hybrid and its inaugural all-electric effort, but Mercedes-AMG has taken less than five days to go from the 843hp GT 63 S E-Performance to this, the battery-powered 761hp EQS 53 4MATIC+. Both are debutants at the Munich show, and the message couldn't be clearer: Mercedes' performance division would very much like a piece of the market currently fixated on the Porsche Taycan and the new Audi E-tron GT.

As you might expect from a car tasked with planting AMG's flag on the fast-rising EV mountain, it is not short on technical prowess. The EQS is already at the top rung of Mercedes' new battery pyramid, underpinned by a bespoke platform and not short on either pomp or ceremony - but even in standard format the EQS 53 is intended to stand clear of the cooking models with 658hp/701lb ft of torque from its revised dual motors and a 0-62mph time of 3.8 seconds.

Of course you'll be wanting the AMG Dynamic Plus package which delivers 761hp via a boost function in Race Start mode - not least because this is precisely the same figure claimed for the Taycan Turbo S. Even with it and the accompanying 752lb ft of torque you won't be equalling the Porsche's heart-squashing 2.8-second-to-62mph performance though because the EQS is a wee bit heavier. In fact Mercedes says it weighs 2655kg. Which makes a hybrid Bentley Bentayga look ready for the beach.

One good reason it weighs so much is the 107.8kWh of usable battery capacity it has stuffed in its underparts. For comparison, the Taycan has space for just 83.7kWh - which accounts for the difference in combined range. Where Porsche optimistically claims a maximum of 296 miles for the Turbo S in the city, Mercedes says the EQS 53 is good for 326 to 360 miles. Which is more. And more is good.

Naturally this new generation battery comes with rapid charging capability thanks to the system's 400v electrical architecture, and will accept up to 200kW from a DC charger - less than the 270kW a Taycan can handle, but still sufficient (Mercedes says) for a 186-mile 'top up' in just 19mins. The manufacturer notes that you'll even get AMG-specific wiring and management software for a greater performance bias in Sport and Sport+ modes. Fancy.

The electric motors have been treated to even more fettling. Apparently the enhanced power is 'ensured by new windings, stronger currents and new actuation via inverters with specially developed software.' So there we are. The press bumf draws particular attention to the rear axle, where the motor has been treated to a six-phase design based on two windings with three-phases each. Which sounds good for the kind of rear-bias attitude everyone would expect from a 761hp AMG, but the 4Matic system is fully variable anyway, and apparently reassessing the torque delivery 10,000 times per minute to make sure it's arriving in gratifying fashion

Like the standard EQS, the chassis is four-link to the front and multi-link at the back, with air suspension doing all the heavy lifting. AMG says the latter gets the same dual pressure relief valves as the GT 63, and has busied itself redeveloping a number of other components for the EQS 53, including the rear subframe and motor mountings, as well as the wheel carriers and control arms. The car also earns rear-axle steering as standard for better all-round agility and improved stability at high speeds.

When you've had enough of that, braking is via an AMG high-performance six-piston calliper system with 415mm front discs - although if you don't think those up to the task you can option in ceramics with 440mm dinner plates, equalling the eye -popping proportions of the rotors found on the Lamborghini Urus. Around them there's a choice of 21- or 22-inch light-alloy wheels in Aero or Heritage design, complimenting a really quite modest rethink of the EQS's aerodynamically efficient shape.

Finally, alongside the all the driving modes you'd expect, AMG has added a new 'sound experience', which adds 'Balanced', 'Sport' and 'Powerful' to the reassuringly titled 'Authentic' setting. Apparently these "hallmark" driving sounds are generated with the help of special loudspeakers, so-called shakers and a sound generator. We're not sure how familiar any of these noises will be to a veteran AMG customer, though it's nice to know that the firm is doing everything it can to make the transition to battery power seem bonafide rather then merely necessary. No word on prices just yet, but expect the EQS 53 to go on sale later this year.