Can the famously flawed 156 GTA be made into a proper sports saloon? Chris Rees makes the case

After a gap of 26 years, Alfa's evocative GTA nameplate returned on a car that could have been a true great: the 156 GTA. When it arrived in the UK in 2002, it was one of the year's most highly anticipated newcomers. 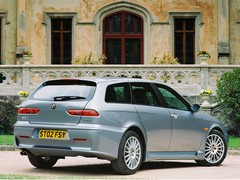 Still one of the prettiest estates ever made

So it was with genuine exuberance that I climbed off the prop plane at Wick airport in the far north of Scotland for the launch of Alfa's new GTA. As it turned out, this was a terrible choice of location for a press launch - not because the traffic-free sweeping roads weren't fantastic (they remain some of the greatest in the UK), but because they uncovered every ill thought-out fault in the car.

The first problem was that the GTA really wasn't 'alleggerita'. Sensational though Alfa's 3.2-litre V6 engine was, it made the GTA 55kg heavier than the 2.5-litre V6 156, with most of that extra weight over the front wheels. Alfa selected a very strange choice of dampers and springs for it: the dampers were too stiff on bump and didn't have enough rebound, giving rise to the twin problems of crashiness over rough surfaces and an unsettling sense of 'float'. The 156's bugbear of bottoming out on undulating roads was even worse in the GTA, and torque steer was a constant companion.

Like most journalists on the launch, I came away frustrated that the 156 GTA was such a blunt tool, and I stuck it in my oubliette of could-do-better target-missers. 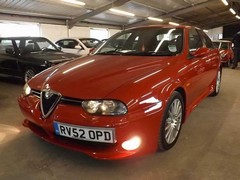 Dampers, a diff and ARBs transform the GTA

Then I started hearing stories from owners and specialists that they'd sorted the GTA's issues. I went and drove a few. In fact, I've now driven four different owner-modified GTAs. As a result, I've done a total volte-face.

I don't normally subscribe to the modders' charter, but in the GTA's case Alfa clearly got it so wrong that even small changes make a huge difference. By fitting 15mm shorter springs, Eibach anti-roll bars and Koni FSD dampers, I can attest that the handling is transformed. No float, no bottoming out and much more precise turn-in.

And then there's the differential. Probably a majority of UK GTAs now have Alfa's Q2 diff fitted - partly because Alfa's original diff insisted on exploding at the first opportunity, but also because the Q2 diff is so effective: it lets you put the power down much more easily, mitigates torque steer and improves turn-in. 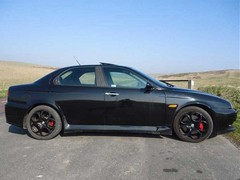 The engine is the one thing that definitely doesn't need any mods. The 250hp 3.2 V6 remains an absolute classic, capable of 155mph and 0-62mph in 6.3 sec while sounding like cream poured over silk.

At £8,950 is a red 62K-mile example that's sat pretty much unused in a private collection for nine years. A pristine, 21K-mile black example has sadly now sold, representing the very top end of the market at £12,495.

Such relatively low prices have attracted, ahem, a certain type of buyer for whom a visit to the crash barrier or knacker's yard is a badge of honour. That's making an already rare car - only around 350 GTAs were imported to the UK - even scarcer. Me? I'd love to find a 156 GTA Sportwagon estate, but there are none in the classifieds - not too surprising as just 112 Sportwagons were sold in the UK. I've now got one eye on the classifieds and the other on the Eibach parts catalogue.