The first and latest R8 are separated by 200hp, two cylinders and more than a decade. So - ancestor or orphan? 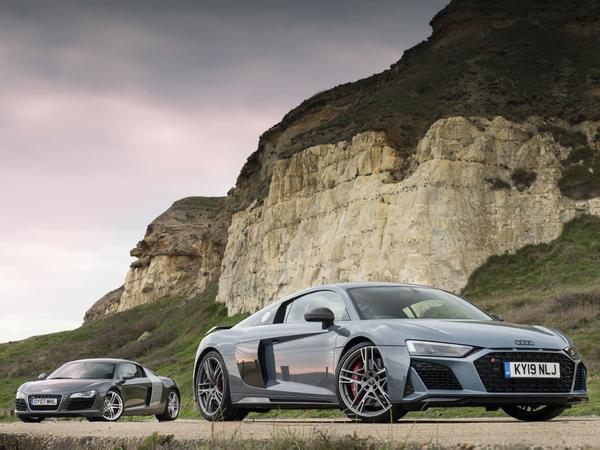 Never underestimate the impact of the original Audi R8. After more than a decade, we're accustomed to it being among the world's best supercars - but in 2007, the car's achievement was unprecedented. It was like the German football team converting to beach volleyball, and being immediately and expressively brilliant at it. The car had familiar Audi traits - it was good looking and dependable and made expensively from bedrock - but it was also terrific to drive, and, shockingly, huge fun to boot.

The B7 RS4 had hinted that Audi had some idea of what they were doing when it came to a proper driver's car, but the R8 proved the point emphatically. Moreover, it did it in the toughest possible segment, with its near-faultless combination of mid-engine balance and V8 thrill aimed straight at the Porsche 911. Had it been only half decent, the world would still have lauded its achievement - but the R8 won Autocar's Car of the Year in 2007, the same year it also came third in evo's equivalent, beating the CLK Black, Lotus 2-Eleven and Aston DBS to name a few.

Finally, then, Audi - or, more specifically, quattro GmbH - had produced a car that could stand tall in any company, and also proven to its senior rivals at Mercedes-Benz and BMW that it could successfully launch in any segment, rightly expectant of success. Were it to introduce a V12 hypercar now with 2,000hp, it would be a technical achievement built on the R8's foundations. It was that significant a milestone in its maker's journey.

Its reputation is so sterling that frankly any excuse to revisit it is seized upon, although now there's a legitimate excuse in the shape of its latest successor. The R8 has evolved pretty substantially since that '07 launch - where it was once V8-only, it's now V10 only; buyers used to choose between manual and automated manual transmissions, and now it's dual-clutch only; and where the R8 was originally aimed at 911 Carreras with 420hp, it's now a 200mph, 620hp supercar. Yep, 200hp now separates the first R8 from the new model - that car being capable of 187mph...

For the longest time, Audi UK did not have a car representative of the 4.2-litre Mk1. Now that omission has been corrected, and in glorious style because they've somehow managed to reacquire one of their original press cars - one with a manual gearbox, magnetic dampers and a little more than 50,000 miles on the clock. It's nearly 12 years old and it is tremendous.

No-one you've heard extolling the virtues of the V8-powered R8 was fibbing. If anything, its light burns brighter now that Audi has reverted to building slightly one-dimensional fast cars. Again, it's the combination of idiosyncrasies - and their near perfect measure - which hypnotises you: on the one hand, Audi's penchant for quality, cut-glass style and total engineering integrity; on the other, driver engagement, wrung from a rear-bias all-wheel-drive powertrain that prizes reward over end result.

That the atmospheric V8 and its associated open-gate six-speed manual are not the standout feature rather says it all about how good the first R8 is. That engine - distinct from the B7's unit chiefly by virtue of the dry sump - is fabulous; it's just that the rest of the car is better. As in the RS4, it obviously needs rev to deliver its best (with peak power at nearly 8,000rpm), but since when was that a hardship? The throttle response is fabulous, the speed still more-than-plentiful and the noise muted but musical, somewhere between a muscle car rumble and flat-plane shriek.

And puntuating it, of course, you get that tactile manual transmission which can be enjoyed at any speed. Occasionally it will baulk, but to have the opportunity to match that wondrous engine with your choice of gear ratio is a real privilege. How anyone could have opted for the R-Tronic automated manual is a mystery. A good shift, up or down, is mechanical pleasure made real. After it, everything with a paddle is mediocrity.

But the real joy is how the original R8 goes down a road. In 2007, Audi had barely given anyone the impression that it knew how best to fuse sportiness and comfort into a single product - and then it delivered this babbling brook of suppleness and spaceframe sophistication. Even with the magnetic dampers in their stricter mode, there's a plushness to the R8's ride that simply doesn't tally with how low it is, how big the wheels are, and how well sorted the body control is. There's simply no pay-off for either, no compromise.

The hydraulic steering is slow by contemporary standards, yet is so much nicer than any variation on the Dynamic Steering theme. It feels like the full feature film compared to the trailer that is the new R8 steering - you'll have an idea of what's going on in the latter, and in wham-bam style - but it's the former that delivers all the nuance. That this R8 is also easy to see out of, easy to drive at slow speed and just very easy to get along with, while also being a genuinely exciting mid-engined V8, completes this picture of a vice-free, omnipotent sports car.

So how earth, seriously, can the new version be anything like the original? Well, the short answer is, it can't. On the most obvious level, things have changed. Not least among them, circumstance. Audi is less interested in rivalling the Porsche 911 now it is part of the family, and it discovered very early in the R8's life cycle that building a 'supercar' grade product is much more profitable than knocking out sports cars. Consequently, the latest 'Performance' variant of the R8 - which is what we have here - is the fastest and most powerful Audi ever put on sale.

At 620hp, the car is 50hp beyond a McLaren 570S, and within the ballpark of its price bracket. And no doubt about it, it is built to compete at that level. The most recent design tweaks - that more aggressive front and end and swollen diffuser - are about ensuring that it doesn't want for presence compared to more exotic foe; just as new titanium valvetrain components and a software retune guarantee that its naturally-aspirated V10 is not left wanting when measured against a turbocharged unit of lesser capacity.

Tinkering aside, the engine remains sublime. Audi's form in this area is indisputable - the RS3's five-cylinder is an absolute belter, too, and the SQ7 V8 diesel just plain witchcraft - but the V10 is the jewel in its crown. Comparing it to the V8 is precarious given the massive difference in output, although the same insatiable eagerness for revs remains, only now it is bulked up and delivered with enormous punch. In the original R8 you get to savour the build up and ready your left leg for an upshift; the 2019 version is ferocious enough to have you on the edge of your seat, and scarily rapid enough to keep you away from the level of trouble implicit at its redline. Adding 200hp to an already fast car (while keeping the weight similar) will do that..

Retaining the Audi Space Frame underbody - and making it 40 per cent more rigid than it was the first time around - has meant largely retaining the model's uncanny ability to ride well. Where a TT RS would be leaden and unforgiving, the R8 continues to glide and that amplifies its all-round usability. Changes from the pre-facelift Mk2 R8 are limited to a new anti-roll bar and a different steering tune (alterations that migrate from the very well received RWS model) and they pay dividends in the car's flair for being accessible and easy-to-live-with where required - and taut and responsive everywhere else.

Having a chassis that tolerates a B-road makes the V10 exploitable in a way that an AMG GT, for example, is not. But it doesn't take long to put your finger on the current car's problem. Where once the R8 rewarded at all commitment levels - thanks, in part, to quaint features like hydraulic steering and a manual gearbox - it is now necessary to wind its successor up to mind-boggling speeds to access its best side. Previous experience suggests the R8 is utterly fantastic at that point - but nothing even approaching that is viable on the road.

Instead the driver is left with a dual-clutch gearbox that is almost peerless (but obviously offers next-to-no interaction), Dynamic Steering that is unerringly fast and rather numb and ceramic brakes that are too snatchy when only a tiny bit of their potential is required. There's still a great car there, amongst it all - but in the transition from £80k Carrera rival to £150k McLaren fighter the R8 has lost a chunk of the intimacy and communicativeness that made it so loveable at the outset.

For some, the extra performance is worth the sacrifice. Today's R8 is 1.5 seconds quicker to 62mph than its predecessor, which sounds like a gargantuan amount. But the V8 took 4.6 seconds to get there, which is over half a second slower than a contemporary TT RS - which clearly would not do. Audi would argue, rather convincingly, that the R8 has simply moved with the times and its benign character at the national speed limit is merely a by-product of continuing progress. (Although customers of McLaren's Sports Series might beg to differ...)

Either way, we're not going to be curmudgeonly enough to deny that the facelifted version of the second generation R8 doesn't represent a persuasive step forward in objective ability: after all, it's faster, grippier, and far more capable than its now distant predecessor. As an experience, however, the original still lingers in the memory more fondly. It was no less important to its maker than the Quattro or TT - yet it towers above both from a present-day perspective because it delivers on the dynamic front even in 2019. Pile into that hope chest the fact that you can now buy one - a good one - for less than £40k, and it's rather hard to quibble with the first generation R8 even when measured against its younger self. It remains timelessly and quantifiably brilliant.