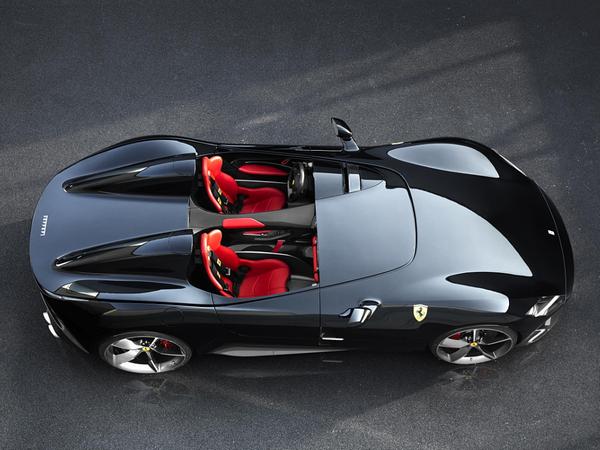 You know those voluptuous open-top V12 Ferraris that leaked onto the internet yesterday, the Monza SP1 and SP2? They've now been officially confirmed by Maranello along with confirmation that each produces 820hp at 8500rpm from an enhanced version of the scintillating twelve-cylinder used by the 812 Superfast. The one- and two-seat Ferraris are the most potent production road cars to wear a Prancing Horse on their noses - and by golly do we want one.

The 812 is super bloody fast, we know that, so imagine experiencing its outrageous pace with an extra 20hp, no windscreen and - if you're really keen - no passenger seat to lug around. The single-seat SP1 weighs 25kg less than the coupe, which is 1525kg dry, while the two-seat SP2 tips the scales at 1520kg, thanks to the addition of the second seat and rollover protection, hidden within a second buttress.

The Monzas are said to be inspired by Ferrari's vintage sports car racers, like the pretty 1948 16 MM and achingly gorgeous 750 Monza and 860 Monza from the 1950s. As such, their designs eschew the usual aggressive aero-pieces of modern performance cars for smoother forms and, well, they look bloody great, don't they? The bodywork itself is made from carbonfibre and much of the running gear beneath has been taken straight from the 812, so it's not all old school.

Performance remains, as you would expect, 812 rapid: 62mph comes in 2.9 seconds but more impressively, 124mph comes in 7.9 seconds (identical to the SF) despite the fact there's no windscreen to slice air particles away from your not particularly aerodynamic noggin. A helmet is a must, obviously.

Ferrari says that its aero boffins have borrowed virtual windscreen tech from their Formula 1 colleagues to help direct as much air flow around the passenger compartment as possible, but it's fair to assume there'd be some (a lot of) buffeting when you approach the Monza's 186mph 'plus' top speed. That velocity would be circuit only, of course, but you can also drive these Monzas on the road.

Price? Ferrari is keeping that to itself, although it has said that volume will account for well below 5% of Ferraris sales. They'll be shown at the Paris motor show next month.