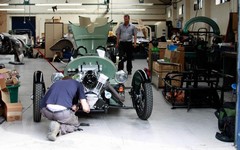 Morgan started life building three wheelers, and given the interest in the 'new' car you might wonder why it ever stopped.

Reviving the 3 Wheeler might yet prove to be the best thing Morgan has ever done, the incredible enthusiasm and nostalgia for this modern interpretation of Morgan's earliest cars proving an unexpected sales smash before it's even hit dealers.

What started as a bit of fun at the Geneva Salon saw 500 orders being placed before anyone had seen it away from the show stand. And following its appearance at the Goodwood Festival of Speed last week - including the unexpected endorsement of Dizzee Rascal (Whom..? Ed.) and the arrival of the first batch of demo cars at dealers, Morgan is expecting a further rush of orders. 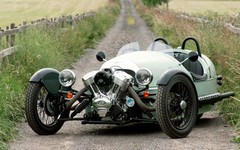 Is the Malvern factory ready though, given that speedy delivery has traditionally never been a Morgan strong point? "People won't wait," reckoned Morgan designer Matt Humphries when we visited earlier in the week. "If they want it they want it and they're certainly not going to accept hanging on for more than a year. We'll have to up production."

The factory, which employs around 175 people, currently builds around 750 cars annually, but the 200 or so 3 Wheelers it expects to make this year will take that comfortably into four figures. The simplified, back to basics 1.6-litre Ford-engined 4/4 has freed up some production capacity and, our man explains, there are only another 20 or cars to build before the run of Aero Supersports is complete. 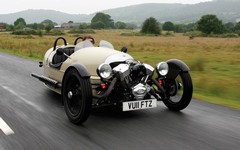 The 3 Wheeler's ability to duck under the radar of crash regulations and other legislation means Americans will also be able to enjoy this slice of Brit nostalgia. Jay Leno has already ordered his, to accompany an original Matchless engined example, and his public support will no doubt help Stateside sales.

Shameless nostalgia perhaps but it's what Morgan has always done well at and, well, best of British to 'em!