Shelved replacement for Honda NSX is go, but as a racing car only 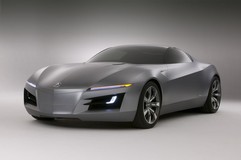 Another chance for canned NSX...

Plans for a front-engined replacement for the Honda NSX supercar could be revived courtesy of a change in the rules of Japan's Super GT racing series.

Honda's front-engined, rear-drive supercar project (pictured right as the 2007 Acura Advanced Sports Car concept) was canned at the end of last year as Honda felt the bite of the economic crisis, but Super GT regulations banning mid-engined layouts could give the project a second chance.

The NSX racer bowed out at Twin Ring Motegi earlier in November, after a 13-year racing career that involved 49 poles and 36 wins from 105 starts. Now the teams that ran the car need a replacement quickly.

...thanks to this lot getting banned from racing

Fortunately for them, development of the race version of the V10-powered supercar was already underway when the road car was shelved, because the two projects (racer and road car) were originally planned to 'go live' simultaneously in early 2010.

The new super GT offering may not spawn a road car, however. Honda is hoping to get special dispensation from Super GT homologation rules to allow them to run the car without the 'nuisance' of having to produce a road-going version.

Is Porsche really testing a 911 Safari?