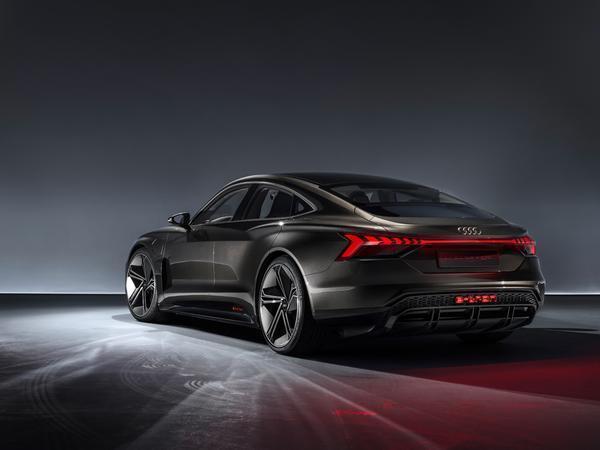 Remember the Audi R8 e-tron from Iron Man 3? Oh, how futuristic that seemed in 2013, with proper sports car performance and design, previewing an electric future with boundless torque and silent speed.

Well, it turns out Audi recalls the film very well, and the future is actually about 18 months away. That's because, not only will this e-tron GT make production in 2020 (and be way faster than that R8), but its maker also saw fit to use Robert Downey Jr to reveal the car in Downtown LA, a handful of miles from Hollywood. Make no mistake: the e-tron GT, indeed the whole e-tron programme, is a very, very big deal for Audi.

So what is it? Well, officially it's a "highly dynamic coupe with a low floor", boasting technology developed with Porsche plus design and character "packed full of unmistakable Audi DNA." It's 4.96m long, 1.96m wide and 1.38m tall, with a 2.9m wheelbase. That makes it a tiny bit shorter, 5cm wider and a little lower than an A7. From what can be surmised, it seems like the Porsche-developed technology will be in the platform and powertrain - both Taycan and e-tron GT are going to use the Premium Platform Electric architecture, with the Audi boasting 590hp from its twin electric motor setup, just 10hp behind the Porsche.

Audi reckons the e-tron GT will be capable of 0-62mph in 3.5 seconds, 0-124 in just over 12 and a limited top speed of 149mph. Iron Man's R8 from just five years ago apparently boasted 4.8 seconds to 62mph and 124mph flat out. Range for this car is over 250 miles by WLTP, and the 90kWh battery can be charged wirelessly or plugged in. Thanks to the car's 800-volt system, the latter can provide 200 miles of range in 20 minutes with the right charging infrastructure.

Range is also boosted (by up to 30 per cent, it's suggested) through recuperation, involving both the two electric motors and the electrohydraulically integrated brake system - meaning there's manual coasting recuperation, automatic coasting recuperation and brake recuperation. Only when a braking force of more than 0.3g is required (apparently only 10 per cent of all decelerations) are the ceramic rotors employed, the rest being taken care of by the electric motors. Interestingly it's claimed the e-tron GT's centre of gravity is lower than that of an R8, thanks to the flat design of the batteries.

With Audi keen at the (nearly) Hollywood reveal to stress how close this car is to production, it's understandable that the e-tron GT is perhaps not as dramatic as recent concepts like the PB18. Audi points to the model's sloping roofline, a cabin that tapers towards the rear and wheel arches that are "sculpted emphatically" around 22-inch wheels. The colour, in case you were wondering, is 'kinetic dust' - no joke. It's designed to be "practical without being 'technoid' standoffish" - whatever that mean. Anyway, it's a handsome show car in the flesh, albeit one that could probably be in production already - whether that says more about Audi's current design language or the slightly conservative styling of this concept, we wouldn't like to say.

Inside, the e-tron GT boasts a vegan interior, with synthetic leathers and materials used throughout. As you'd expect it's a lavish cabin, both in the pics and real life, minimalist yet luxurious as well. Furthermore, while it can't be seen here, there's 550 litres of carrying capacity - 100 litres at the front, 450 in the rear.

So there it is, your kinetic dust look at the future. Best get used to it, too: in addition to the e-tron SUV shown in September, the e-tron GT will eventually be joined by an e-tron Sportback as well - indeed Audi says there will be 12 all electric models by 2025, covering "every relevant market segment". This e-tron GT will reach volume production in 2020 - developed by Audi Sport, no less - and first deliveries are expected early in 2021. Wonder what Iron Man will be driving by then.