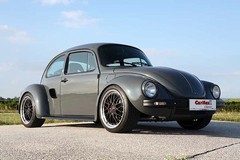 While there are some automotive marriages of old and new that just should not be contemplated, occasionally a genetic mutation crops up that most definitely improves the species and this, a genetic splice of a 1973 VW Beetle and an MY 2000 Porsche Boxster is definitely one of those.

Ordinarily, we would think it a shame to have a car of near-classic status sullied with modern running gear (this E-Type Jag with modern XKR bits is a prime example), but it's not as though there aren't millions of Beetles scuttling around the world's streets, and the original car's dynamic character could hardly be described as scintillating. 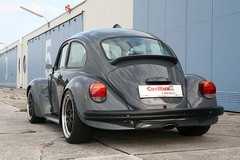 Thus, the installation of the bottom half of a Boxster into the top half of a Beetle to create the '

is adding to the variety of interesting metal on the world's roads rather than reducing it. And a mid-engined, 270bhp Beetle is most definitely interesting.

It's the work of an Austrian chap called Siegfried Rudolf, who owns a campany called Carmaxx, which specialises in the restoration and customisation of VWs and Porsches. It seems that the idea for the Bugster was sparked when he parked his own Beetle next to his wife's Boxster and noticed a striking similarity of wheelbase. 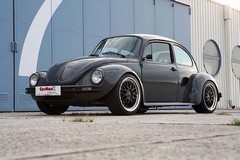 As an example of the evolution of the automotive species, we reckon it's a pretty fine job, too, with a wider track, big wheels and a Porsche dash the only serious clues to this Beetle's enhanced abilities.

It's only a shame VW itself isn't evolving the Beetle this way. After all, Porsche is part of the VW empire these days...