BMW Motorrad: behind the scenes

leaving the line PH2 was invited along for a behind the scenes look.

Located in Berlin, the state of the art plant takes up a space of 220,000 sq m and is responsible for the production of over 100,000 BMW motorcycles a year. As you would expect, inside everything is meticulously clean and organised, however it is the scale of production that is so impressive. 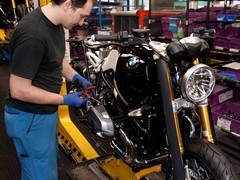 The first NineTs are now rolling off the line

Employing 1,900 staff, the facility builds 600 complete motorcycles a day and can simultaneously construct 22 different models on its five production lines. The whole process is so closely monitored by computers that when a member of the production staff logs into their workstation, the computer automatically ensures that the part-assembled bike arrives to them on its carrier at a pre-determined elevation that suits the worker's height. As motorcycling is seasonal, 70 per cent of the bikes are built in the first half of the year while the remaining bikes are built in the second half. As BMWs are generally built to order, owners can alter the colour or specification of their bike right up until just a few days before it is actually constructed.

The engine
The start of the motorcycle's production is what BMW call the 'parts supermarket'. Basically this is a storage area where trays are filled with all the components required to construct the motor. As each part is recorded and has a set place in the tray, it ensures that should a washer be left over at the end of the line, then it will be spotted and questions asked... 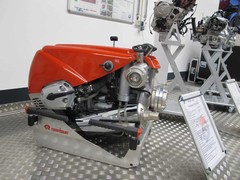 BMW has four production lines dedicated to engine construction and once a motor is built it is subjected to a series of tests before being move to the motorcycle assembly lines. As well as being pressure tested to ensure all the seals are correct, the complete motor is put in a fully automated 92hp engine tester which spins its up to 3,000rpm in each gear while measuring clutch action and vibration as well as the flow of gases in and out of the motor. Although it isn't actually running, the data can easily pick up any potential faults. If it passes it is off to the main assembly line, if it is lucky. Two unlucky engines every week are randomly pulled off the production line for an even more thorough examination...

Construction
Starting with the engine, pre-assembled parts such as the frame and suspension are mounted to it as it travels along one of five production lines. As the motor progresses through around 14 work stations, the bike gradually takes shape before a full electronic diagnosis check ensures all the electrics work and finally Berlin air is put in the tyres and it's off to the rolling road. 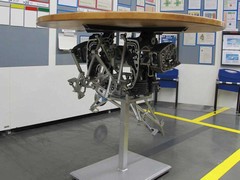 Even the furniture is made of bike parts!

Every single bike is tested to 130km/h for 2km on the rolling road and this is the only part of the factory where the workers don't swap between jobs. BMW believes that dyno operators need to gain a 'feel' for what a correctly assembled bike feels like on the rolling road and therefore encourages them to stay in this area. Once passed, the bike is signed off by the rolling road operator (each bike produced can be traced back to the individual tester) and it then shipped off to one of the 130 countries where BMW motorcycles are sold.

Appetite suitably whetted we can't wait for our first go on the NineT too...