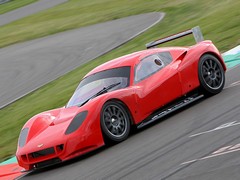 The new Chevron GR8 one-make race series finally gets underway this weekend, despite a design and build process that has taken barely more than six months.

A few weeks back we brought you news and pictures of the 255bhp, 2.0-litre Cosworth-powered car's first test at Anglesey. Since then, the GR8 has sprouted some aero add-ons (including the chunky rear wing seen on this, the development car, at Anglesey last week).

The first 10 customers have already driven the development car, but only around six cars are expected to line up for the first race at Silverstone this weekend. Chevron expects to have closer to 20 GR8s lining up on the grid at the second meeting of the series - at Brands Hatch on 19 June.

"Given the timescale we went public with at the outset, I sense a lot of people thought it couldn't be done," says Helen Bashford-Malkie, MD of Cheshire-based Chevron Racing Cars. "Our design, engineering and production team have put in maximum effort, working seven days a week virtually since the project got under way. If this wasn't motor racing and if they weren't all enthusiasts, it could never have happened.

"The decision to use conventional construction techniques – and avoid the temptations of carbon/aramid composite structures – has obviously helped in meeting the deadlines that were set."