De Tomaso Pantera To Return By End Of 2011

Classic coupe to be reborn in November

The way things were...

The resurgent De Tomaso has announced that the legendary Pantera is set to return before the end of the year.

De Tomaso will unveil the reborn super coupe at the LA motor show in November, almost exactly 40 years after the car was first launched on the market.

The new Pantera will be the second fruit of a new three-model line-up, the first of which (the frankly odd DeAuville SUV - below right) has been launched today at the Geneva show.

The final part of the De Tomaso revival will come in the form of an all-new limousine, which is due on sale in 2012. 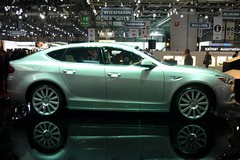 We hope that the Pantera is a bit more appealing than the DeAuville, however. Despite being the work of Pininfarina, it appears to be a combination of a 5-series GT and a Dodge Avenger (perhaps they drew it in a lunch break?).

Salvation comes with a planned 550bhp V8 that's also on the way, however. Hopefully that's the one that'll find its way into the Pantera...

2021 Festival of the Unexceptional | PH Gallery