DeltaWing: What Happened Next

Nissan might have left, but it's onwards and upwards for DeltaWing racing team

earlier this year, we’re glad to be able to report that the DeltaWing project, which took our award for

’s extraordinary creation has returned to the track, now powered by an Elan 1.9-litre four-pot turbo, and is currently involved in its first-ever full season of the

, competing in the LMP1 category for the first time. 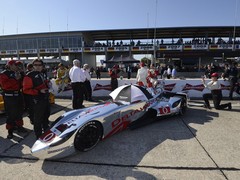 The DeltaWing’s life post-Nissan hasn’t had the most auspicious start, though. Following a rushed effort to find a new engine supplier, the team was only able to fit in two days of testing at Road Atlanta before the opening round of the series, the Sebring 12-Hour. Despite constant work by the team, the freshly-liveried DeltaWing was forced to retire in only the second hour of the race due to an engine glitch. “There was a gremlin we didn’t recognise,” said Don Panoz, DeltaWing Racing Cars’ managing partner. “Time caught up with us. It happens.” Still, we suppose it’s a preferable result to the

that partially destroyed the car in testing at Road Atlanta last year.

The team, however, is looking to the future, with its eyes now firmly on the next round of the series at Laguna Seca, to be held on May 9 to 11. And in the meantime, they’ve been busy getting more testing miles under the car’s tyres, notably with British driver Katherine Legge at the helm. There’s talk of Legge becoming a regular driver for the team, which would undoubtedly add another strand of patriotic interest to the DeltaWing story. “[The DeltaWing] is completely different to anything else out there and definitely different to anything I’ve ever driven,” she said of the test. Harris, too, spoke highly of it after his time behind the wheel. 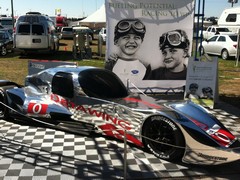 Coupe will race next year

Development of the car is forging ahead behind the scenes, too, as the unveiling of a coupe version shows. This features a completely new tub and a wider cockpit, among a series of tweaks that will enable it to comply with the 2014 LMP1 regulations. What you can’t see from the outside, though, is that the driver is now centralised in the cockpit, rather than on the left- or right-hand side. “We’ve elected to put the driver in the middle as another way of differentiating this coupe from other ones,” says Elan engineer Simon Marshall. “It’s best for us to put the driver in the middle to protect them. It’s going to be good for visibility as well.”

How well the coupe fares in next year’s season will depend largely on the successful development of the Elan engine this year; we’ll be watching with interest.