Two minutes behind the wheel and deaf for a week... (With Video) 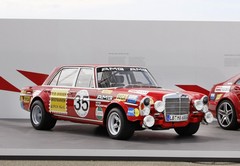 Red Pig or ‘Roten Sau’ is not the kindest nickname ever bestowed on a historic racer, but presumably it summed up some of the sentiment surrounding the Mercedes 300 SEL 6.8 AMG back in 1971 when it was entered in the 24 hours of Spa.

The 300 SEL in race trim, bored out to 6.8 litres and making around 420hp, caused a sensation by finishing the race in second place, in spite of its prodigious appetite for fuel and tyres. It was an auspicious start for M-B’s tuning arm, and set the tone for an engineering philosophy that hasn’t changed a lot since. So big Benzes married to mighty AMG-fettled V8s have given us knee-trembling thrills for nearly 40 years, and long may the relationship continue! 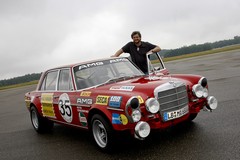 This isn’t the Roten Sau that found fame at Spa, because the original was sold to Matra in France to use for testing fighter aircraft landing gear. Apparently a hole was cut in the floorpan behind the front seats, so aircraft tyres could be lowered to the track at 200mph with 600-800lbs of pressure and measurements recorded. There wasn’t really much else on the market that could do that sort of thing back in the 1970s. Or nowadays, come to that.

The ultimate fate of the Roten Sau is unclear, and this replica was built for the Geneva motor show by AMG in 2006. Apparently even finding a suitable base car was a trial, as the restoration team needed a car without a sunroof and aircon – and most of the 6500 300 SELs built between 1968-72 were luxuriously equipped. This car was found in Berlin, and new parts for the reconstruction were gathered from all round Western Europe with every panel being replaced apart from the front passenger door. The restoration/rebuild was completed in six weeks, which is the sort of progress you can achieve if you own a car company. 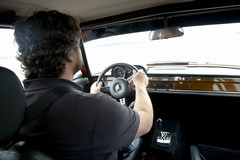 AMG wheeled the beast out unexpectedly

, and a few of us got to take it for a spin around a disused airfield. A couple of minutes behind the wheel - with a stern instruction not to burn rubber - meant there wasn’t time to do much more than briefly bask in the (relatively) vintage atmosphere, revel in the sound of that gloriously unrestricted V8 and giggle quite a lot. But if you must have ‘driving impressions’, well on the airstrip’s smooth asphalt it felt much like any big Merc of the era, with ride and steering occupying that curious ‘twilight zone’ between classic and modern.

The slightly incongruous leather 'sports' wheel needed a bit of a twirl, and the four-speed auto box had an old-school ponderous feel, but we can’t really begin to imagine how the car must have felt at full chat on the circuit at Spa. Utterly heroic, or utterly insane probably, depending on your point of view. 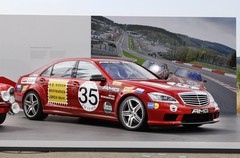 Son of Red Pig - aka 'Thirty-Five'

As you can see (hear!) from the video clip, AMG also had their newer version of the ‘Red Pig’ on hand, in the shape of the one-off S63 they used to first launch their new 5.5 litre twin-turbo V8. That one sounds pretty good too...

(Apologies for the video quality – those V8s were making the ground shake.)