For those who like the E30 BMW 3-series, but don't think it has quite enough bite... 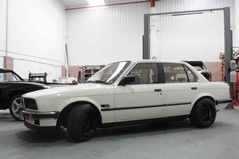 The definition of 'sleeper'...

This unassuming white E30 BMW might look like a humble 3-series, albeit one that's had a bit of track tweaking, but underneath the bonnet lurks a bit of a surprise - because beneath that nose-hinged bonnet lurks a rather special motor.

You see, this car has been converted into a V8 3-series by Banbury-based outfit Gama Cars, who are in the process of building 50 E30 3-series cars with chunky V8s shoehorned in.

"The idea behind the E30 V8s came from a love for E30s but a slight disappointment that they struggled to keep up with more modern cars," says Gama's technical director, Gregg Alvarez. "So we decided to build the E30 V8-S you see in the pictures and then produce 50 more as either complete cars or as an engine conversion if you already have an E30 you love." 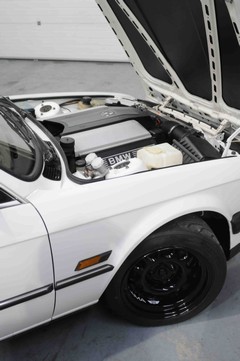 If you want to add a few more cylinders to your E30, a conversion starts at around £7000, but is 'fully customisable to customer spec' - so the sky is the limit in spec and price terms. Every part (engine-wise) that goes in is genuine BMW, while all the other parts to link the engine and drivetrain are fabricated in-house.