Alfa's 147 follow-up gets its moment in the spotlight 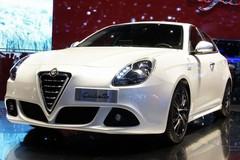 After months of speculation, rumours about its name and a drip-feed of leaked and official images, the Alfa Romeo Giulietta has broken cover 'in the metal' at the Geneva Motor Show.

The Focus-sized car is longer and lower than the best selling 147 it replaces. Alfa is so confident they'll see a repeat of the 147's success with the Giulietta that they're planning selling 100,000 a year.

Alfa Romeo's new design language (read: make everything look like an 8C) works out well on the Giulietta, though that rear window is a little on the small side... While it looks like a low slung (ish) hatch, it's actually 50mm taller than the 147 it replaces. We also know it'll be available with a wide selection of 16"-18" wheels, so there are plenty of choices to suit your style requirements.

The car will be available with a variety of petrol and diesel engines from launch with a 170bhp turbodiesel topping the line up. That is until the 230bhp Cloverleaf version breaks cover later this year.

No word on UK spec or prices yet, but we'll know more when the car launches at the Goodwood Festival of Speed this Summer.