Fed up of the politics at the 'ring? Bilster Berg Drive Resort might be the answer

It might be hard to imagine from this handful of mucky construction photos, but Germany's answer to the fabulous Ascari Race Resort is only a few months away from its first trackday. Despite a three-week delay caused by snow and Arctic temperatures, the Bilster Berg Drive Resort is already taking bookings for the first trackdays in July. 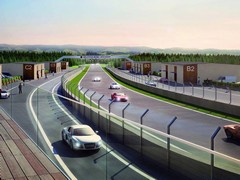 How it'll look by the summer, hopefully

Participants of the first trackdays will be able to see for themselves if the input of names such as Walter Rohrl and Hermann Tilke have really made us a mini-Nordschleife.

On paper it certainly looks intriguing. Over 70m of altitude change in 44 different places in a 2.6-mile (4.2 km) track is enough to make any trackday addict wince. Or salivate. And thanks to a tour of the still-muddy course on the back seat of an Audi Q5, we can tell you this track will be anything but simple.

At one point of the tour our driver has to give up. Even our Audi Q5's Quattro four-wheel drive isn't enough to navigate us around the eleventh turn, provisionally called Mausefalle (The Mousetrap). Still unsurfaced, it's a decreasing-radius hairpin preceded by a staggering 26 per cent (1 in 4) descent. We simply look down at the turn and then drive back the way we've come. And that's only one turn of 22... 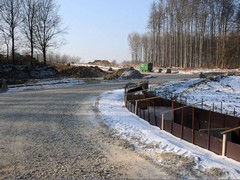 Track is in place, yet to be surfaced

Sometime in April, depending on the weather, a team of two asphalt-laying machines will spend an estimated three to four continuous days laying up to a million tonnes of tarmac. And that's only a fraction of where the estimated 34 million euros of investment will be going. You might have already guessed from the photos, but the circuit is being built on an old British Army ammunition dump. Each of those double-walled warehouses will be renovated and converted into workshops, private garages and business premises.

While shareholders will have their own 'private' days each month, like Ascari, most days will be available to rent by driving experience companies, trackday organisers and manufacturers. Around 70 miles east of Dortmund and about 350 miles from Calais it's a bit more of a drive than the 'ring but the owners claim the track will be easily accessible for enthusiasts the world over. So maybe we're making the wrong comparison; this isn't a German Ascari but instead a Teutonic Bedford Autodrome with Nordschleife gradients.

For a full list of trackdays at the new circuit you can check this page by Renndays, a third-party German trackday calendar website. The main Bilster Berg website is here.