Greetings from Goodwood, where I'm guest of Lord March (along with a few others, admittedly) for the preview day for the 2012

. Which is, it seems, simply an additional opportunity to rag some very tasty cars up Lord March's driveway. No complaints there, especially given that we're on a promise of actually getting a go with a few ourselves if all goes according to plan. 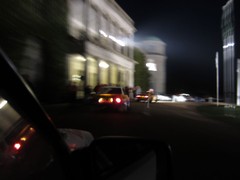 The event kicked off with a dinner last night, which kind of set the tone. The crunch of Audi A8 tyres on the gravel outside Goodwood House was somewhat drowned out by the line of angry sounding rally cars ticking over impatiently by the steps. And what rally cars! A Metro 6R4, Ford RS200, wild looking Vauxhall Firenza, Austin Healey 3000, Opel Manta, an ex-Tony Pond Rover SD1 and even what turned out to be a Group B Lada. Out on the lawn meanwhile were parked various Lotuses new and old, a new BMW DTM car,

and more besides. Just an average night round at Lord March's then.

Given a helmet and told to go outside I was pointed towards the RS200, strapped in beside a nice bloke called Jim with hands like shovels and then fired up the hill and around the bumpy, chalky rally stage still giggling at the absurdity of it all. Loitering around, helmet in hand, scored me further rides in the Group B Lada, whose owner reassured me with the words "they'll need an egg timer to record me round here" before adding "though saying that the brakes don't really do much" and then, best of all, a Mk1 Escort packing a 2.0-litre BDA and a driver not afraid to use it. 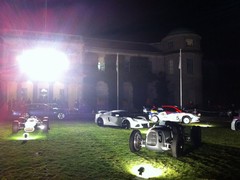 Dinner was interesting too, especially being seated next to a nice chap from Bentley who explained how he'd spent the last while working on the EXP 9 F SUV concept. I winced as he said "we didn't want a beige response and we've been reading all the responses online to it to find out what people think!"

Including PH, it would seem.

Well, no danger of a beige response here...

So what beckons today? Lots, if it all plays out. Including, hopefully, proof that the V6 Lotus Exige S and Evora GTE can actually do more than draw crowds at motor shows and inspire wishful column inches from the likes of us. I'll be dipping in here throughout the day to bring you the latest so keep checking back.

1145h - Passenger ride in the M5 with Andy Priaulx

Goodwood is a vision of automotive anarchy but the kind of anarchy PHers can appreciate, with Group C Jaguars and Mercedes C9s mixing with Opel Manta rally cars, Lamborghini Aventadors and Camel liveried Lotus F1 cars.

Not your typical traffic jam then. But if you're going to be stuck for an hour waiting for your turn up the hill an M5 with Andy Priaulx is both a) warm and comfy and b) an interesting place to be. Lots of discussion of the forthcoming DTM season, interspersed with 'wow, look at that' interruptions as yet another fabulous car goes past the other way in the queue. There's a prize for most enthusiastic getaway so we plunder the M menu for the everything up to 11 setting that'll best contrive tyre smoke and drama. But we're thoroughly outdone by Morgan's Matt Humphreys a couple of cars ahead, who sets down a formidable early claim.

Time to go and take my seat alongside Lotus test driver Matt Becker in the Exige V6 now. Should be interesting...

So we've seen plenty of the Exige S at motor shows but this is the first time to see it out in the open, living and running. With Lotus test driver Matt Becker at the wheel no less.

Although the exterior is a lot beefier than the old Exige on the inside it's all very familiar and as cosy as ever. Matt's especially proud of the new Race mode on the traction control though - it actually learns as it goes and, though counter intuitive, the technique to getting the best out of it is to plant the throttle on the exit to the bend and let the black boxes work it all out.

The car is definitely impressive and less the giant leap you might and, rather, simply an Exige but more so. Which is what we want. Whether it's what people with 50K in their pocket want is another matter, Matt's assertion that it's GT3 pace and focus for half the price certainly seems appealing. And the atmosphere from the inside at Lotus? A shrug and "I've worked there for 20-odd years now ... it's Lotus!"

From the passenger seat there's a good deal more aggression in the way the Exige delivers its performance without diluting the suppleness and flow that we all know and love. Setting aside the bigger picture it seems the engineers can still put a great car together. Hold that thought...

More to follow tomorrow. Including how my final ride at Goodwood ended up with me upside down in front of Lord March's house. Stay tuned!

That thing about being upside down in front of Goodwood House? Well, the above should explain that a little! More on this to follow but, thankfully, I managed to complete the ride without revisiting my lunch.

PHers are meanwhile busy uploading lots of pics into the comments thread below so do take a look there. A more formal round-up and look ahead to what you can expect at Goodwood this year will follow shortly too but with the unseasonable sunshine, an amazing breadth of cars and celebs and a little taster of the Goodwood magic the preview event is something of a sneaky treat. Oh, and a special mention for the Nissan Juke R too, which looked utterly ludicrous and properly bonkers fast going up the hill.

A few of PH's visual impressions below.

Goodwood motorsport back in business for 2021