Honda has revealed that it is to enter the FIA World Touring Car Championship (WTCC) with the new Honda Civic.

It will compete in 'selected' rounds of this year's championship, likely to involve the later rounds in Japan, China and Macau, before a full-season campaign begins in 2013. 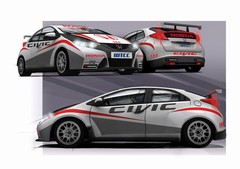 For the new project, Honda is to build an all-new 1.6-litre four-cylinder direct-injection turbocharged petrol engine, developed to fit the FIA's Super 2000 regulations.

The WTCC programme is to be run entirely independently of the Team Dynamics BTCC squad, which is building its own new-shape Civic contenders for the 2012 BTCC.