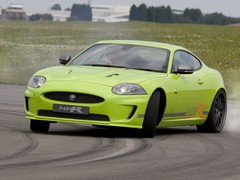 A year after Jaguar revealed its XKR Special at the Goodwood Festival of Speed, PistonHeads has learned that a new production version of the car has lapped the fabled Nurburgring Nordschleife in 7min 58secs.

PH spoke to Jaguar's managing director Mike O'Driscoll at Le Mans, where the marque had been hoping to celebrate its 75th anniversary with (at least) a finish for the XKR GT2 racer entered by US-based but factory-backed team JaguarRSR. (More on that below.)

According to Mike the new XKR derivative is "basically the production version" of the harder-edged XKR Goodwood Special concept which so wowed us when it was demonstrated at the Festival of Speed last year. As well as having a sub 8 minute 'Ring lap time under its belt, it seems the production version will also boast a top speed circa 186mph making it a paid-up member of the notional '300km/h Club' - which Mike tells us is important to customers in the German market.

The new production model's lap time was posted by one of the company's development drivers, and not 'some hot-shoe racing driver', according to the Jaguar boss. Either way, it was evidently a proud moment for Jaguar's ride and handling guru Mike Cross, who rang his boss the moment the times were in.

"Mike (Cross) was so excited by the time that he called me up from the Nurburgring to let me know," Mike (O'Driscoll) told us at Le Mans. "This is definitely not a level of performance anyone would have associated with the XKR before now."

No specific details have been revealed for the new production car, which hadn't even been officially confirmed before the weekend. For reference the Goodwood Special from last year featured an uprated version of Jag's 5-litre supercharged V8 making 523bhp and 516lb ft of torque, as well as lowered suspension, 21ins alloys and a tweaked exhaust for greater 'stage presence', all of which seem likely to make it into the production model.

Indeed, XKR prototypes have been spotted recently sporting what looks like a revised front splitter, a larger rear spoiler and with various elements of brightwork trim having been replaced by a satin-effect graphite finish, as per the Goodwood car. We look forward to more 'official announcements' on the subject soon - including how much it's going to cost, and when you can buy one! 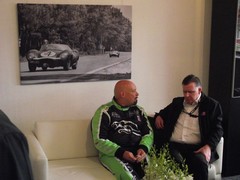 Meanwhile, Mike also confirmed to us Jaguar's intention to stick with the JaguarRSR racing program, in spite of the marque's unfortunate withdrawal from the Le Mans 24hrs on Saturday.

"We've had better weekends," he told us dryly over a subdued Sunday afternoon lunch in Jaguar's Le Mans hospitality unit, "but if I'm confident of one thing it's that Paul Gentilozzi (the JaguarRSR team owner/driver) will commit whatever is necessary for us to become competitive."

The XKR racer hasn't yet got up to speed in its native American Le Mans Series, partly (we hear on the grapevine) because it is the only GT2 car running Yokohama tyres against stronger Michelins, but also because there have been other teething troubles in the handful of races it has entered thus far. 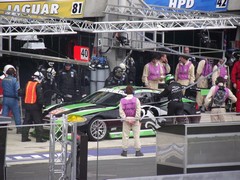 At Le Mans the car withdrew from the race in the first few laps suffering from an electrical problem that caused a big power drop at 5750rpm, some way short of the engine's 6,800rpm limit, and which would apparently have made the car 20-30secs a lap slower than its rivals.

The cause hadn't been traced when we spoke to Mike on Sunday, although your roving reporter picked up a hint that it might have been interference from the Automobile Club de l'Ouest's own 'black boxes' installed on every car to supply timing data. If this was the case, nobody else appeared to suffer similar ill-effects, but we're not ones to shy away from reporting the birth of a rumour that the A.C.O. might have (inadvertently) 'spiked Jaguar's guns' at Le Mans. Could such a thing be true?