Jaguar F-Type confirmed for production; world asks 'what took you so long?'

Jaguar has finally confirmed that the long-awaited F-Type will make production. The announcement has been made at the New York show, where Jaguar Global Brand Director Adrian Hallmark confirmed that the car previously known as C-X16 will, come the autumn, be shown in final production form and named the F-Type with sales to start next year. 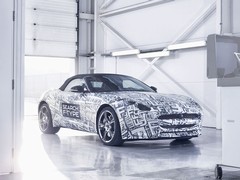 About bloody time too!

Rumours of a sportier, Porsche-rivalling Jaguar have been doing the rounds for years - since the late 80s in fact. That project was an ill-fated successor to the XJ-S and, since then there have perioducally been concept cars and rumours reviving the idea of a small sports car, invariably dubbed 'F-Type' by someone. Almost exactly 10 years ago we ran a story saying 'F-Type delayed' and, while most times it's nice to be proved right, nobody could have predicted that delay would stretch to a decade!

The F-Type label of course carries huge emotional baggage for Jaguar - cue the 'spiritual successor to the E-Type' headlines - and Jaguar accepts that this is "a market segment that we have been absent from for too long." Hallmark says "the core appeal of Jaguar's cars is their sporting heart and that heart will beat stronger than ever before in the F-Type." 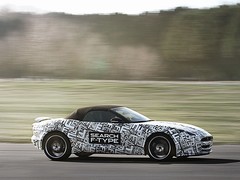 A more measured view - he's been taking his time over it after all - can be found from design boss Ian Callum, who's mused several times over the years on what the F-Type should be.

Callum recognised that the car would need a harder sporting edge. Later in the year PH joined Callum for a talk where he acknowledged that the E-Type's legacy was "a cloud over his head" but hinted that light weight and agility were, perhaps, of greater relevance for future Jaguar sports cars than

Hard facts? Limited so far, but the pre-show release boasts that the F-Type will launch not as a C-X16 style coupe but as a convertible "utilising Jaguar's industry leading knowledge of all-aluminium construction." It goes on to say, "A range of petrol engines will be available - including a new powerplant family - and all will deliver stunning sports car performance." 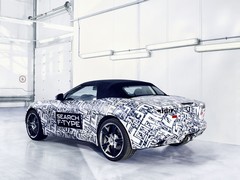 So will it get the full-monty, KERS-enhanced 475hp promised when

was first shown last year? To be confirmed, but the heart of the F-Type is more likely to be rather more conventional and based on a V6 version of Jaguar's AJ-V8, possibly supercharged to 380hp if it makes good on Jaguar's promises for the petrol-powered half of the C-X16's hybrid powertrain.

According to the release, the F-Type's development schedule has now moved to on-road testing so if you live anywhere near Jaguar's Castle Bromwich plant where the car will eventually be built expect to see stickered-up prototypes like the one in the pictures in your area soon.

Full technical details will be released later in the year and, after keeping us waiting more than long enough, now we really can't wait!