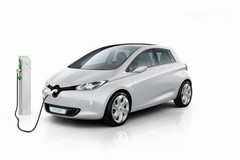 Check out the airbags on that, etc...

A French judge has ruled that Renault can name its new electric car Zoe, a verdict that will no doubt bring a sigh of relief to fans of cars named after first names out there - and a whimper of despair for people who have those first names.

The French judge threw out a case brought by the parents of two girls called Zoe Renault. They argued that their children - and others named Zoe - would be forever the subject of teasing and mockery.

In a fantastically po-faced statement to the press, the families' lawyer, David Koubbi, argued that the two Zoes, and Zoes all over the world, would now be subject to a lifetime of ribbing and that, as they grew older, would be prey to such quips as "Can I see your airbags?" or "Can I shine your bumper?"

"There's a line between living things and inanimate objects," Koubbi told the Associated Press, " and that line is defined by the first name".

The judge disagreed, concurring with Renault's point that Zoe was not only a name but also a common, everyday noun. He also said that the was no evidence that the Renault Zoe's existence would cause "certain, direct and current harm" to the Zoes out there.

Renault can therefore now officially continue with the name Zoe for its new electric car, due in 2012, which means 'life' in Greek and which is also play on ZE, or zero emissions - although the pun police might be after it for that howler.