The sale of Saab to Chinese investors may have been vetoed by GM, precipitating the company's tumble into bankruptcy, but the carcass is still twitching, and now it looks as if it's being picked-over by Mahindra.

Mahindra, India's largest producer of SUVs, is said to be in the process of setting up meetings with Saab's administrators, with a view to buying the whole or parts of the Swedish car company. 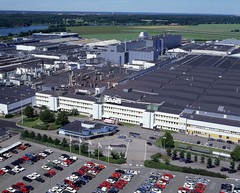 At least that's what industry publication

Mahindra is on a bit of an expansion drive at the moment, too. It got hold of a 70 per cent stake in Korean-based SsangYong in 2011 to take advantage of the company's tech knowledge and sales network - it's quite easy to imagine Mahindra doing the same with Saab.

But Mahindra isn't the only concern sniffing around Saab. AN says that at least one Turkish investor is considering taking a punt - supported by a Turkish government that is desperately keen to create a successful domestic car brand.

Follow the whole Saab Saga in the forums here