Prang leads to speculation a record attempt is on the cards... 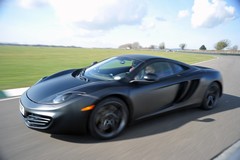 Victim said to be an 'early prototype'

McLaren is investigating the cause of a high speed accident that saw one of its early 12C prototypes take out a section of the barriers at the Nurburgring on Friday.

The car in question is already back in the workshops at McLaren's Technical Centre in Woking and has not been put out of action for good, we're told. The unnamed driver is OK too, but we can't get any word from the firm as to whether the prang was human error or a technical malfunction. "We're looking into it, and when we find out we probably won't tell you," is the easiest way to paraphrase the firm's official response to our enquiry. Charming, sniff!

Either way, reports from the German circuit suggest the car suffered a pretty big 'off'. Here's an excerpt from bridgetogantry.com who are pretty good on these sorts of things:

"After last night's industry pool finished, the McLaren took to the track alone, driving flat out. A helicopter with a TV crew were doing their best to keep up. Eager drivers waiting for the public session to begin reported the MP4 coming past them at the Nordschleife Zufahrt carpark at full speed, before disappearing under Antoniusbuche. Within seconds tyres were screaming and witnesses reported the sound of a large impact. Shortly afterwards a covered truck recovered a wrecked car from the area after Antoniusbuche and Tiergarten. When touristenfahrt finally opened (1 hour behind schedule), the area where it's presumed the McLaren crashed was declared a roadworks zone with evidence of barrier damage and fluidspills readily apparent."

McLaren told PH this morning that the helicopter 'was nothing to do with us', and that the prototype was at the 'Ring for ongoing durability assessment work'.

However our source did confirm the crash took place at the end of the scheduled test session, which (we are happy to speculate) is exactly the sort of time that drivers might attempt to post a hot lap.

So is McLaren going to quote an official 'Ring lap time for the MP4 12C?

"We may do at some point, but it's quite a challenge because you can go all the way down there and get set up to find the weather's not right or something - so it's not the focus of our activity," says our official source. That'll be a 'yes' then...