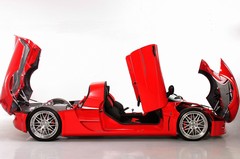 Electric cars come in all shapes and sizes but the Li-ion Inizio at the Detroit show looks more interesting than most. Hand crafted by NASCAR-schooled engineers in North Carolina, the Inizio will hit 0-60mph in just 3.4 seconds and has a top speed of 170mph.

The only thing more interesting than that? The fact that it was presented to us at the Detroit show by a female NASCAR driver by the name of Leilani Münter (yes, really and, no, she's not) who describes herself as a race car driver, biologist and race car driver. Only in America and all that, her business card bears the slogan 'never underestimate a vegetarian hippie chick with a racecar'. Uh, OK then... 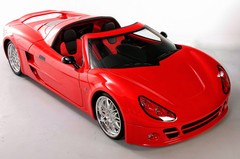 Combining as she does both glamour and environmental credentials, Münter is an obvious spokesperson for the Inizio, as the scissor-doored supercar is an unusual combination of tree-hugging pretensions underpinned by good ol' NASCAR engineering. As such there's a burly tubular spaceframe chassis underneath that dramatic skin (optionally available in carbon), Audi TT rear lights and Porsche Carrera GT-esque rear deck fairings among what's best described as a mish-mash of influences.

Under the huge rear clamshell of the range topping RTX version is a two-motor 290Kw electric drivetrain with 550lb ft of torque and a four-speed, paddle shifter gearbox. Proper gears on an electric car? Why yes, says project manager Paul Daigrepont, the better for both ballistic acceleration and top-end clout - a video of the Inizio burning rubber on a screen beside the car underlining the point at the show. 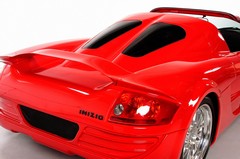 Costing from $139,000, the full beans RTX version will cost $249,000. Its range is said to vary between 150 and 200 miles, and the charge time is as little (Pardon? Ed) as four hours with the optional charging station that can be installed in your garage at home. Sales are due to start in September.