Next year's Boxster coupe is squaring up for a scrap with its big brother. PH gets an early preview

Porsche's head of design calls the styling of the current Cayman "humble" and "modest". Others might say effete, but after a walk round the newly revealed replacement we can report it definitely has a bit more aggression to it.

Subtle changes do make a difference

Arriving in UK showrooms March next year and launched at the LA motor show today (Wednesday), the new version of the coupe Boxster is hoped will boost the popularity of what so far has been Porsche's slowest-selling car.

Technically speaking the car has already been revealed in the form of the new Boxster. The two cars share the new direct-injection six-cylinder boxer engines with the base 2.7-litre losing 200cc on the current Cayman, but increasing power by 10hp to 275hp. The 3.4 in the Cayman S is rated 325hp, a jump of 5hp. Interestingly both are 10hp punchier than the same engines in the Boxster.

The entry Cayman costs £39,694, which is £500 cheaper than the current car but just over two grand more than the equivalent Boxster. It hits 62mph from rest in 5.7 seconds, or 0.1 second quicker with the optional 7-speed PDK twin-clutch gearbox. 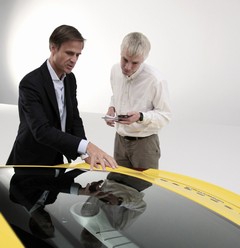 The S weighs in at £48,783, a grand more than today's car, and will hit 62mph in five seconds dead for the standard six-speed manual, with the PDK option just creeping into the fours.

So those are the bare figures. We'll have to wait to find out whether it'll beat the sublime handling skills of the old car, so here in a drafty German photographic studio, we're talking styling with design boss Michael Mauer, who we've just grilled on general Porsche matters.

The current Cayman is the only Porsche left not created under his watch. He's not rude as such, but maybe a touch apologetic.

“There was never a question about its ride and handling, but still some people were not so sure it was a true Porsche," he tells us. "The design itself was a little bit humble, understated."

He likens it to the shy younger brother of the 911, afraid to speak lest he grabs too much of the limelight from its older sibling.

But not this time. "We wanted to give the car a new visual message, saying much clearer 'I'm a real sports car'," he says. 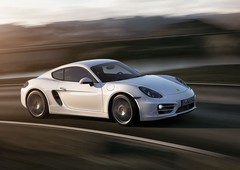 We're talking subtle differences here - it's a new Porsche after all. The new car has a 60mm longer wheelbase and a longer roofline. This time the rear window has a slight bow that means it doesn't disappear into the rear haunches like the old one. As with the Boxster, the rear active spoiler is stretched into the lights and looks good with it.

There's a stronger focus on the side vents channeling air into the mid-mounted engine, and like many updated cars today the body lines are more precise to give a technical look to the extra muscle definition. If the yellow car up top looks as though it squats particularly well on its optional 20in wheels, then we can reveal a photographer's trick: several sand-filled water bottles in the (capacious) boot.

As before, you look through the rear window onto a fake strut brace between the similarly visible rear suspension turrets in the boot. We ask Mauer about this.

“Ferrari would display its engine here. We can't do this because the boxer engines are so low in the car, so we wanted to do something that attracts your eye," he says. Fair enough! 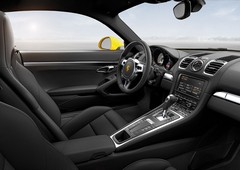 New tech on this car includes the new electro-hydraulic steering that instills such fear in car enthusiasts, rightfully in some cases, but Porsche's is one of the better ones.

If you choose the optional PDK, likely to be around £2,000 again, you can then add adaptive cruise control to set a distance to the car in front. Shame its sensors are bumper mounted though - more chance of picking up grime.

Economy gubbins such as start-stop help the economy and emissions to the point that only the manual S breaks the 200g/km CO2 barrier, and then only barely. All are rated in the 30s for mpg.

PASM active dampers are an option, as is Sport Chrono with its launch control and dynamic transmission mounts. And torque vectoring does that trick of pinch-braking the inner rear wheel to better help it round corners. 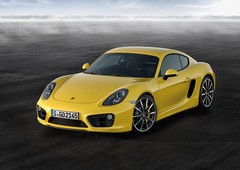 It shouldn't need much help. The two-seater is up to 40kg lighter than before to bring the base model in at 1340kg, thanks in part to aluminum doors, boot and bonnet. The engine is perfectly placed for optimal balance, the car is stiffer than before and, well, Porsche knows what it's doing.

Hard to say whether it's more comfortable for taller drivers, a criticism of the old one. Felt okay to this six-footer, but you can't really tell until you do long distances.

Mauer is confident Porsche is onto a winner here, especially when you ask him about rivals. He points out first that the Cayman is the only mid-engine sports car at this price point, perhaps writing off the Lotus Evora as too costly. As he says, "There's the Audi TT, BMW Z4. These are competitors, but there isn't really THE competitor, which shows Porsche is offering something special." As he didn't say, watch out 911.