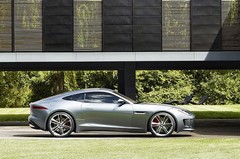 Chocks away and tally-ho folks - these are the first official pics and details of the new two-seater sports car that Jaguar intends to unleash against German rivals at the Frankfurt motor show next week. Called the C-X16 and soon to become a production reality, the new machine (in what is officially termed 'production-concept' guise) takes the traditional front-engined, rear-wheel drive formula and updates it with a hybrid drivetrain with 50:50 weight distribution. So not only does it look sensational (well it does, doesn't it?), but you can tell the mung bean brigade it's 'sustainable', too.

The best news? A fully-productionised version of the new machine is expected to go on sale late next year with prices starting at around £50k. 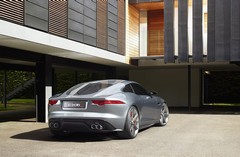 Show car is a 'production-concept'

A tad shorter, a smidge wider and a gnat's taller than the next generation Porsche 911 2+2 (also making its Frankfurt show debut) the C-X16 is a size down from the existing XK range although it shares a shortened version of the next-generation XK's platform. It's also the shortest Jaguar since the 1954 XK120, we're told.

Under the new Jaguar's shapely bonnet is an all-alloy 3.0 V6 that's supercharged to produce 380hp and 332lb ft. That's not too shabby in itself, but the concept's performance is supplemented by an electric motor producing 95hp and 173lb ft - the driver can whip up the extra ponies at the push of a steering-wheel boost button. So, with an eight-speed gearbox and lightweight aluminium chassis, the C-X16 will crack the sprint to 62mph in 4.4secs and reach a top speed of 186mph. It's also capable of 41mpg, and emits just 165g/km of CO2. 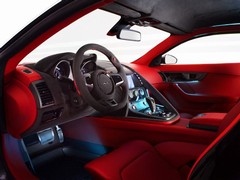 Jaguar says the C-X16's aluminium bodywork is wrapped as closely to the mechanicals as possible, in a form 'that distils the essence of Jaguar sports cars into the next evolution of an already award-winning design language'. As befits a premium coupe, the cabin is trimmed in fine leather and Alcantara, with surfaces featuring a variety of anodised aluminium, piano black, dark chrome and carbon-fibre finishes. The manually-adjustable bucket seats are made of lightweight composite materials with a central carbon-fibre spine for rigidity and support.

But it's the powertrain where the innovation lies, and Jaguar describes the C-X16 as boasting 'real-world hybrid technologies that enhance the driving experience, as well as the car's environmental credentials'. 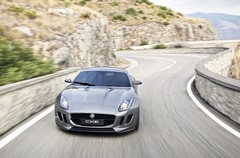 Jag design themes have been 'evolved'

The performance-boosting electric motor is inspired by the Formula One KERS system, they say, and the purpose of the set-up is not simply to supplement the V6 engine's power. It also reduces fuel consumption, and allows the C-X16 to perform as a zero-emissions (yes, we know they meant 'zero tailpipe emissions') electric vehicle at speeds of up to 50mph on low throttle openings.

The starting point is Jaguar's eight-speed transmission with start/stop tech, recently launched in the XF sports saloon, but the C-X16 also gets a motor-generator mounted as one unit with the gearbox. This draws power from a 1.6kWh lithium-ion battery pack mounted behind the seats for 50:50 weight distribution, and there's an electro-hydraulic brake energy regeneration system on the back axle. A dashboard display graphic indicates when the additional boost provided by the electric motor can be deployed, and when fully charged the 'Push to Pass' boost button mounted on the steering wheel unleashes the extra 95hp for up to 10secs. Both the battery pack and motor are liquid cooled (to prevent performance losses through heat build up) using chilled air from the vehicle's air-conditioning. 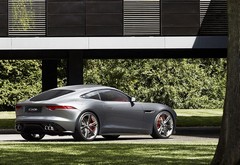 The supercharged V6 engine itself is a 'modular' development of the AJ-V8, and is said to point the way to the next generation of Jaguar petrol engines - which we take to include N/A sixes and the four cylinder unit that will be required for the firm's planned BMW 3 Series rival. It shares the same lightweight aluminium architecture as the V8, and a high-pressure, die-cast block with cross-bolted main bearing caps for increased strength. It's also got quad-cam, four-valve-per-cylinder heads, and a second-generation Direct Injection combustion system with a raised compression ratio of 10.5:1.

While the C-X16 is clearly an evolution of current Jaguar design, the firm says the new shape is defined by three 'heartlines'; the front wing crease, the rear haunches that wrap into the tail and the sweeping roofline. There's a subtly rounded trapezoidal grille, while the clamshell bonnet is defined at the outer edges by two sharp creases rising along the upper edges of the front wings. 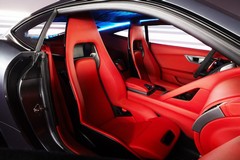 KERS battery is behind the seats

The desire for simplicity has driven the aerodynamic element of the C-X16's design, they say, so there are no unnecessary wings or spoilers. Downforce is provided by a discreet front splitter, venturi-effect tail design and side sills to channel air smoothly along the car's flanks, all of which are finished in carbon fibre. The sharp crease created where the curve of the roof meets the tail also aids the aerodynamics by ensuring the air separates cleanly from the bodywork at high speed, they reckon. The concept's 21-inch alloy wheels which have been pushed to the extremes edges of the car and finished with a carbon-fibre inlay.

The interior is said to feature a 'one-plus-one' layout, and the C-X16 takes inspiration for elements of its layout from aeronautical ergonomics, such as the joystick-style gearlever and banks of toggle switches that also reference classic racing Jaguars. 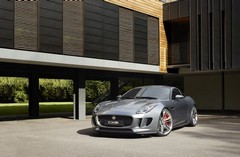 That's pretty much all we can tell you today, but you can bet we'll be crawling all over this fantastic new British contender at the show next week. Look out for more in our Frankfurt show coverage.

Oh, and we fully expect a cabrio version to show up at Geneva next Spring, a year on from the 50th anniversary celebrations of that famous E-type debut. Wonder if Norman Dewis fancies another road-trip?