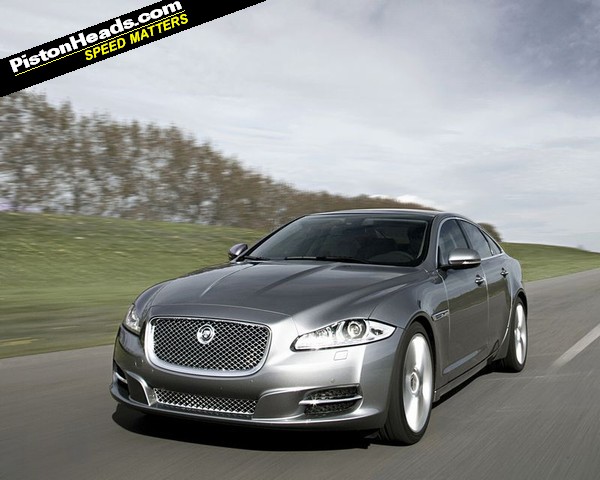 We're a few weeks away from getting our bums into the driving seat of the new Jaguar XJ, but production is well under way as the company builds up inventory ready for the start of deliveries in March.

PH was invited on a tour of Jaguar's Castle Bromwich factory last week, where we discovered you can't move for XJs parked nose-to-tail around the premises, and the ranks of pre-delivery cars made a fine sight from the factory tour bus. In contrast, we suspect Jaguar's key German competitors in the luxury car sector will be viewing the army of XJs massing on their borders with some trepidation, if you'll pardon a military metaphor in such dubious taste. 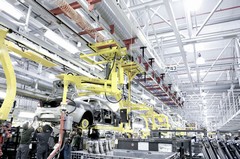 The final trim and assembly hall

While others would be tempted to press the point by suggesting 'Jerry' isn't half as twitchy as he might be if Jaguar's Castle Bromwich factory was still churning out Spits and Lancasters, you'll be glad to hear PH would never sink to playground-style pot-shots like that. (And if we did it wouldn't be our fault, because Jaguar started our tour by handing out a magazine titled

, an official record of Castle Bromwich's proud heritage as a WWII war-bird factory. It's ripping stuff if you like that sort of thing, which we do.)

Back in the modern world, our factory reconnaissance trip provided a fascinating insight into the new Jag's production, which builds on the lessons already learned in aluminium-intensive assembly with the previous generation XJ. 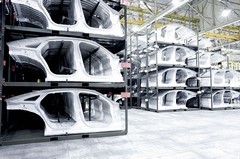 Statistic geeks may be pleased to learn the number of self-piercing rivets in the (glued and riveted) Body-In-White has been reduced 11 percent to 3118 (or 3153 in long-wheelbase guise) when compared to the old XJ, while the level of automation has increased significantly. The number of robots on the assembly lines is up from 88 to 110, and as well as a new one responsible for gluing the Webasto panoramic sunroof into place (

), there are new robots roller-hemming the body panels. Panel edges were previously formed with press tools, with less accuracy and more likelihood of hand-tweaking being required on the assembly line. There's even a robot to apply the door seals, although they haven't got one called James Bonder like the mechanical glue-meister at Aston Martin. 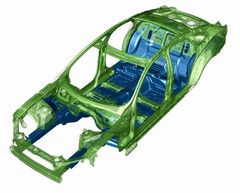 In spite of looking like an all-new car, we learned there is a fair bit of the previous XJ's floorpan carried over (see illustration, right), while the suspension and powertrains are of course familiar from the old XJ and new XF ranges. But the body was started from a clean sheet, and apart from the brand new look is now entirely glued and riveted, so there's no welding required on the assembly lines at all, and the need for hand-finishing has been eliminated. The B-I-W is also 20 percent lighter than the outgoing XJ's, in spite of being both larger and stronger. The single-piece cast magnesium front carrier that replaces the old XJ's aluminium structure welded from 13 components is a good example of where progress has been made. 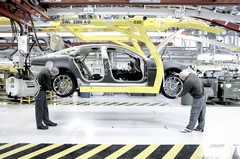 The round things must go here mate!

Quality is a big issue too, of course, and the assembly line staff can all stop the line if the robots don't pick problems up first. Every XJ body undergoes 141 individual laser measurements before it goes to final assembly, and completed cars are subjected to a full VCAT electrical systems test before they can leave the factory.

Which is what we did, even more fired up about this potentially fantastic new British luxury machine. We'll find out if the new XJ lives up to the hype next month and we can hardly wait for the call to 'scramble'!

Click this link for full details of the new Jaguar XJ range.