Subaru confirms official details but keeps schtum on the pric

There's a clear pecking order in the whole Toyobaru saga and it's obvious Toyota is wearing the trousers. Subaru has finally released more official information about the BRZ though, promising 'pure handling delight' against Toyota's 'more passion, more fun'. 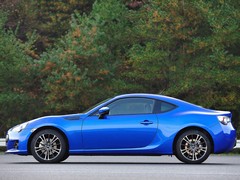 Much the same but with added WR Blue

You will, by now, have probably read up on the GT 86 and noted the 200hp power output and 7.0 seconds 0-62mph headline performance figures from the Subaru developed D-4S 2.0-litre flat-four. And whatever STI may or may not have up its sleeves for now the BRZ is towing the party line with identical numbers. Subaru has revealed a kerb weight of 1,220kg though, vaguely attributing this as a 'reference value' without any further information as to whether this includes the driver and/or fluids. As previously stated though, that's within the ballpark of a Renaultsport Clio 200 and with a similar power output too.

Initial reports suggested the Toyota would weigh in at around £28,000, though nothing official has yet been released. Suffice to say, initial reaction on the PH message boards has not been overly delighted at that news, Subaru still reluctant to stick its head above the parapet and confirm a number.

And after whetting our appetites with all this talk of pure handling delight and such it's going to be a while until we actually get to sample it, with neither car expected on sale before June/July next year. Can't come soon enough.

Previously on PistonHeads: Having buddied up on the development of the BRZ and GT 86 Toyota and Subaru are now engaged in a PR war as both cars approach their official debuts at the Tokyo Motor Show.

Our story on the Toyota GT 86(nee FT-86) has obviously got PHers fired up and though press day isn't officially until tomorrow there was no way Subaru was going to let Toyota steal all the glory. Hence the appearance overnight of some suspiciously official looking BRZ pictures and accompanying info. 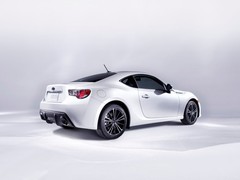 Subaru looks a bit neater than the Toyota

seems to be 'love the idea, hate the price', the originally mooted £20Kish price point engorged to closer to £30K by Toyota. Will Subaru manage to price any more competitively or have the two agreed a pact that'll prevent one from undercutting the other? We'll have to wait and see but don't get your hopes up.

Of the two you'd have to say Subaru is very much the junior partner, though it will be the one actually building both versions. It remains very much a minnow compared with Toyota and though mechanically and physically near-identical it's clear the BRZ is something of the underdog.

We Brits love an underdog though and we're pretty partial to Subarus too. So does the BRZ promise any more than its Toyota equivalent? Not for now, though the STI concept shown just weeks ago at LAsuggests Subaru might have some tricks up its sleeve in terms of hotter versions. For now though it seems the BRZ will match the GT 86's 200hp, seven-second 0-62mph time and the rest. Which isn't surprising considering the two are mechanically identical. Subaru seems to be putting the weight at 1,220kg - on a par with a Renaultsport Clio 200 meaning a comparable power to weight ratio. But, of course, rear-wheel drive.

We'll be bringing you more info and pictures on both cars as the week progresses too so stay tuned.