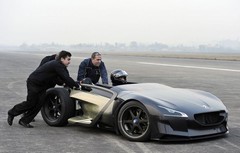 Peugeot's all electric EX1 Concept car has already set several records in France and is now setting more in China, we've just been told. And in spite of the picture the company sent us to accompany the news, one isn't the record for the fastest three-man push to the nearest plug socket...

Nope, driven by China's most popular youth blogger, Han Han, the EX1 has smashed the previous 1/8 mile and ¼ mile records set in September, with times of 7.08.62 and 12.67.54 seconds respectively.

The EX1's previous record breaking driver, Nicolas Vanier, was also in China and he achieved another unofficial record for 0 to 100 km/h, in 3.49 seconds. 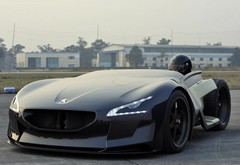 Do we care? Not sure really, but wouldn't the Peugeot EX1 look fantastic with a proper engine tucked between its driver and the back axle?