Join us for an exclusive and very special PistonHeads meeting

between 1000h and 1400h. The precise locations will be revealed to those who have signed up, but we can tell you the venue is in the Doncaster area.

Those aware of XH558 will know just how evocative this aircraft is and to be able to get up close and personal is a rare privilege. We’ll have a dedicated PH carpark outside XH558’s hangar so there’ll be the normal socialising around the vehicles as well as time with the aircraft and Vulcan team. 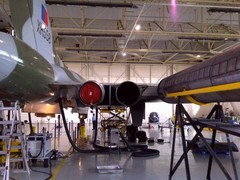 This is the last flying example of Britain’s famous V-Force aircraft, now operated by charity Vulcan to the Sky Trust. We’ll be there as the final preparations are being made to begin the display season, which will take XH558 across the country to airshows and other events which have previously included dramatic appearances low over the trees at the Goodwood Festival of Speed and CarFest. 2013 is a particularly important year for XH558 as at the end of the season she will be out of fatigue life and running low on some critical components.

The Trust is working hard to find ways to solve these challenges so she can fly on for a few more years. Fingers crossed, we should know more not long after our visit.

The Vulcan is a remarkable example of British engineering at its best. The prototype flew just 11 years after the first flight of its predecessor the Avro Lancaster, but it’s performance was in another world. Innovations included electrically-powered flying controls and a speed and agility that was so close to a jet fighter’s that it was given a fighter-style control column in place of the traditional bomber pilot’s yoke. These were the days when the car industry and the aircraft industry were still close, so she uses the pioneering Maxaret anti-lock braking system also seen on the Jensen FF and her emergency power unit is a small jet turbine similar to those used in Rover’s JET experimental cars. 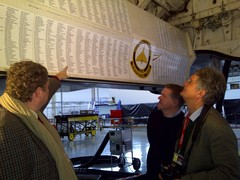 Originally designed to carry Britain’s strategic nuclear deterrent, the Vulcans moved into numerous other roles through their life. It’s only when you hear the aircrew discussing what it was like to be on alert in the Cold War that you realise just how tense the situation could be. One pilot told PH; “If I had been ordered to press the button that releases the nuclear payload over our enemy, there would almost certainly have been no Britain left to fly home to.”

Success as a Cold War peacekeeper meant that the Vulcans may have flown their entire service life without ever entering combat if it hadn’t been for the Falklands conflict in 1982. During a marathon 8,000-mile flight supported by eleven Victor tankers, Squadron Leader Martin Withers and his crew released the bombs over Port Stanley Airport and prevented Argentina operating its Mirage III fighters from the island and initiated the campaign that recaptured the Falklands. Two years later, the last Vulcans were withdrawn from service. Martin – who is also passionate about fast cars - earned a Distinguished Flying Cross for his part in this action and is now XH558’s chief pilot. You’ll see items from his private collection of Falklands memorabilia on display in the hangar.

We are extremely thankful to the Vulcan to the Sky Trust for organising this meet, which we are hoping will make a significant contribution to the costs of operating the last flying example of Britain’s amazing V-Force aircraft. All profits from the event, including tickets and food, will go directly to the charity to help them get XH558 into the air for the 2013 season, something close to many of our hearts.

The itinerary for this very special morning comprises: 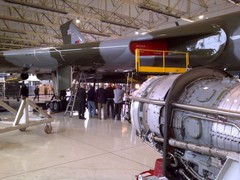 – Arrival and parking in the hangar car park.  Bacon sandwiches, tea / coffee / soft drinks served inside the hangar with time to wander around the aircraft and displays. Note that as with all Sunday Service meets the catering is charged separately

1200h – 1400h – More time to wander around the cars and the aircraft, meet members of the Vulcan team (we are hoping to have a pilot at the meet, tbc), explore the displays of Vulcan history (including some fascinating Falklands War stuff from the pilot’s private collections) and view and buy merchandise

Due to the restrictions set by the airport, and hangar capacity, this meet is only open to a maximum of 70 cars and 140 people. Normally we would ask you to add names to a list to reserve a space, but for this meet we need you to sign up directly on the XH558 page where a payment (along with some personal details) are required to secure your place on a first come, first served basis.

Charges are as follows (please click links to book)

£35 per car, driver and one passenger

£45 per car, driver and two passengers

We are very excited about this extraordinary meet and look forward to meeting 140 of you on the day. Places for cars are strictly limited to 70, but we hope to be able to repeat the event later in the year. Thanks again to everyone who was involved in making this happen.

Note: When applying be aware you will need to advise any change in details of car or passengers by no later than the morning of Monday May 6 on 0845 5046 558 (office hours) quoting PistonHeads Event. Failure to do so will result in refusal of admission to anyone or any vehicle not on the final event manifest. For security reasons, there are no exemptions to this rule.