New 'Awards Edition' to be revealed at Geneva gets extra polish 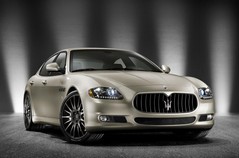 The Quattroporte Sport GT S 'Awards Edition' will make its official debut at the Geneva Auto Show next week, apparently celebrating all the accolades the model has received over its six year life.

We've not been counting, but Maserati reckons the Quattroporte has received no less than 56 awards from automotive and lifestyle publications in 14 countries over four continents. The "Awards Edition" aims to combine in one car all the features that have made the Trident flagship a benchmark in its segment, they say. 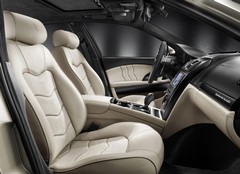 There's a new Quarzo fuso exterior colour - a pearlescent metallic grey with a golden hue - exclusive to the model, while the burnished treatment used on the exterior chrome parts, as well as on the side air vents and radiator surround, matches the 20" Multi Trident dark grey rims with satin finish.

The braking system is enhanced by the hand-polished callipers both at the front and rear, while the interior gets 'Poltrona Frau' leather seats combined with perforated Alcantara with a new 'undulated' pattern, and the headlining is also in Alcantara. Completing the cabin finishes are brushed aluminium door sills and Piano Black satin-finish wood mouldings.

The boot is finished in black trim and features chrome details and a leather side pocket. The attention to detail has even been extended to the mats, which are made of an even richer and softer material.

The Quattroporte Sport GT S 'Awards Edition' will be available in the UK as a special order in the second half of 2010, as a model year 2011. Prices are on application, apparently, and as we haven't applied...