There are noble ambitions and guilty secrets in racing at the ’ring. I’m not sure where I sit on this extreme scale, but it’s somewhere between the two. Because I really want to race the Nurburgring, but I’m feeling more than a little bit guilty about it. 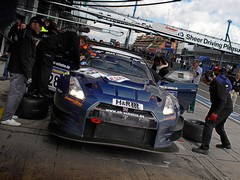 About time to get involved, reckons Dale

I’m sick of being an armchair expert, leaning towards my laptop screen, or hanging over the fence on race day, uttering such anorak statements as “He clipped that too early” or “He’s late on the gas there”.

No, it’s time to get back out there again and feel the adrenaline, or at least the acid rising in my throat. The frantic moments of self-awareness as you try desperately to calm your nerves on the 14-mile formation lap and lull the hind-brain into the driver’s position. Blasting across the line at the beginning of a four-hour race, in a 60-to-70-strong wolf pack of race cars. Wheel-to-wheel, fighting for position over the greatest and most spectacular racetrack on our little green planet. 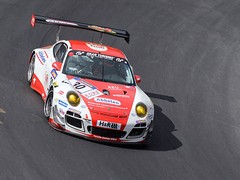 Sabine Schmitz has made it to the VLN

In my sideline position as an instructor I like to think I give good advice based on all my years here at the ’ring. I’d tell anybody who has second thoughts like these to forget about it. I’d tell them, if they didn’t have a figure with at least four zeros sat in the current account, not to risk it. When the time is right, I’d say, you’ll just do it.

So... erm... I am. Only the problem is that I really don’t have that much money. And when was the time ever right? If you were to take all the money I have and try to build a race car with it, we’d be rolling down the Klostertal together in a soapbox racer. And not a very good one, either.

Luckily for my crazy and irresponsible ambitions, it turns out that I’m not too slow behind the wheel. And years of running cars myself mean I’m actually quite nice mechanically, and tend not to break things. I must be getting old. I used to break everything! 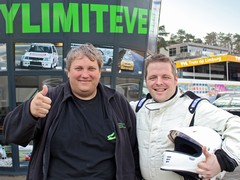 So how do you race the old Nurburgring? There are three championships to contest, each one more professional than the last. First you have the GLP (Gleichmassigkeitsprufung). This can be done on a day license and even in your road car (for German residents) and it’s not a race. It’s a regularity contest with a minimum lap time of 11 minutes per lap. Of course at least 50 per cent of the grid don’t give a toss about matching lap times to the last hundredth of a second and just treat it as 12 laps of driving fast with full flags and no limits. Then they simply stop on the DH straight for a few minutes (to increase your lap time to over the 11 minute minimum) and repeat.

Next you have the RCN (Rundstrecke Challenge Nurburgring), usually held straight after the GLP (half a day each). This is a national championship with real racing cars doing about nine fast laps and a few ‘regularity’ matched laptimes. It’s a great way to pop your Nürburgring racing cherry. 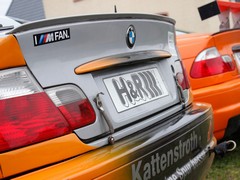 (Veranstaltergemeinschaft Langstreckenpokal Nurburgring) and this is the real thing. A national endurance championship, held only on the ’ring, with factory representation from most major manufacturers. The smallest cars are now the V3 (2.0-litre naturally aspirated) and SP2(T) (1.6-litre turbo) classes, while the quickest are in the SP8 class, filled with

It’s big money to race here, with paid-for drives making up at least 95 per cent of the grid. They start at a couple of thousand to race in something like a Clio with an amateur team, or tens of thousands to drive an event-winning GT3 machine.

Of course, as per the soapbox racer reference, I’m trying to find a way into that five per cent of drivers who don’t actually pay to race. The professionals who get paid to race are probably closer to one per cent, so I’m not aiming that high. 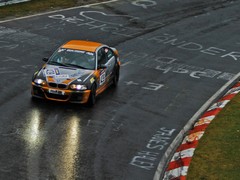 ...shame about the weather, though...

But why should I feel guilty about any of this? Because it’s a hideous waste of what would otherwise be family time, and unless you’re a paid-up factory pilot, it’s still the driver who has to pay the excess in the event of a crash.

As I wrap this up and email it over to Dan, I’m already sitting here in my fireproof undies. Next stop is Jacos Paddock where I’m about to take a six-lap test in this afternoon’s practice session. Noble ambition: race this amazing E46 M3 and coach the other drivers to victory. Guilty secret? It’s got a 6,000-euro excess and the rain clouds are building up over the castle like a dark omen.

Watch the VLN live feed from 11am BST tomorrow here