Yes, it's a mid-engined sports/supercar and yes, it hails form Korea. This is the Spirra, due to hit (Korean) showrooms later this summer, and it justifiably claims to be the first Korean supercar.

The most humble offering of the four-tier Spirra range uses a naturally aspirated 2.7-litre Hyundai V6 with just 175hp, but the range quickly ramps up with a lightly-turbo'd 325hp version, a 420hp version with a larger turbo, and a twin-turbo version pumping out between 450hp and 500hp. 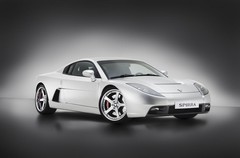 The chassis is a tubular spaceframe, clothed in a carbon fibre body.

It's been a long time in gestation - Proto motors first revealed its PS-II prototype as far back as 2001 - but it looks as if Korea, the world's fifth-largest car producer, now has its very own supercar.