Surrounded by Gullwing Mercedes, classic Ferraris and all manner of glitzy displays you might think VW would struggle to make much of an impression at Techno Classica. But, together with other group brands Audi, Lamborghini, Bugatti, SEAT and Skoda it’s brought out some seriously cool – and quirky – cars. 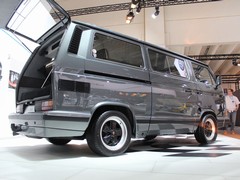 You’d easily walk past this T3 bus, for instance. Yeah, it’s got Fuchs wheels on it and all, but a VW bus? Those wheels are the clue though, because, under the supervision of legendary Porsche engineer Helmuth Bott, Porsche actually built 15 of these 3.2 Carrera-engined B32 T3s back in 1985. The official version is they wanted something fast and comfortable to take along on test sessions with ‘proper’ Porsches, but the reality is someone probably thought it’d be a bit of a giggle.

There must have been a few long nights though, because it was actually considered as a full production model, according to our VW guide. Costing 100,000 DM, those 15 were sold and remain in private hands, VW borrowing this one from an owner for the display. The engine install is as neat as you’d expect too, a Porsche steering wheel among the finishing touches. 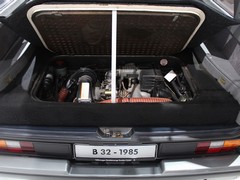 Just across the way VW has a display of rally cars, literally centred around the new Polo WRC. The Group A Mk2 Golf is interesting and there are a couple of rare rally Beetles, including the ‘Salzburg Kaefer’. Built at the behest of Louise Piech in the early 70s for VW’s Austrian importer, just five were built and this is, apparently, the best of the survivors. A sprinkling of Porsche in the engine releases 130hp, our guide saying it’s “kind of fun but kind of dangerous.”

Probably a fair description of the twin-engined Pike’s Peak Golf too, raced (unsuccessfully) against the formidable S2 Sport Quattros in 1987. With two 1.8-litre turbocharged engines it packs 652hp in total, but even this was not enough to catch the Audis and the car was resigned to obscurity. 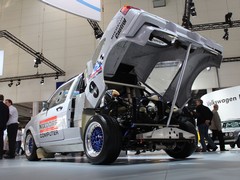 There’s another unique Golf on the stand in the shape of the four-wheel drive Golf Rallye A59 dating from 1992. 275hp, a caged interior and a wide arch kit mark it out as something a bit different from the otherwise unremarkable Mk3 GTI, this prototype a teasing what-might-have-been had VW taken on the likes of the Integrale, Impreza and Evo. Plans for a small production run and parallel rally version were shelved, the current Golf R perhaps finally realising the concept nearly 20 years down the line.

A cool car, and exactly the kind of oddity only Essen can throw up.