This is a pretty good way to earn a crust - arriving at work every day to drive one of 20 private tracks your employer has built on site. Or a driving a track in another country altogether. This is 30-year-old Baptiste Grison's life as a tyre tester for Michelin at its giant Clermont-Ferrand HQ in Auvergne, central France. His exact title is 'subjective tyre tester' which means that he decides what tyre make-up is right for particular car based on "only the feeling", as he puts it. This guy's fingertips (and ears) are as important as any sensor or lap timer, basically. 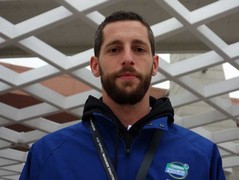 Steering feel? Baptiste is your man

We bumped into Baptiste in China at a Michelin event where he had been dragooned into sitting with journos while we drove strange China-only cars and immediately we noticed his hyper-sensitivity. He spotted a well-muted motor whine in a rebadged electric BMW that didn't rise and fall in line with revs. We struggled to even hear it but by the end of the two-mile run it was driving him crazy. One of his main jobs is working with car manufacturers to find exactly the right tyre to pair with their new car, creating a new version if necessary.

Sports car makers must value handling above all else, right? Not always. "During these last few years comfort and noise is starting to be a bigger matter for the sports car manufacturers," he told us. Part of the problem is that sports cars have become too good elsewhere, or at least too refined. "Because the car are becoming a lot more isolated, you're not hearing so much the engine, so all the noise comes from the tyres."

But because every action has a reaction when it comes to tyres, that noise reduction impacts elsewhere, mainly on wet handling if you change the tread pattern, he tells us. If the client (the maker) isn't happy about sacrificing that, maybe the compound can be changed, which might sacrifice a bit of rolling resistance or durability instead. 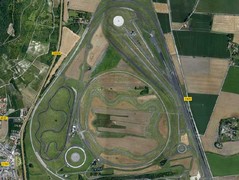 So what big changes has he noticed in sports cars he gets handed over the last few years? "Electric power steering." Do you hate it? "It depends. The first ones weren't that good. But now they're doing a great job - Porsche in 991 the BMW F30 3 Series for example. Of course they're not like hydraulic systems we had before, but pretty good electric power steering set-up feels almost no different," he said. What really winds him up though is when makers reprogramme the steering settings half-way through testing "Now the tyre is no good with the car!" he says.

The car he names as being the memorable he's driven in recent months is the Alfa Romeo 4C. "I really enjoyed that. It's like old school - no power steering assistance, so you really feel the car," he said. "Every movement you make in the car the car has a reaction on the road. This is the kind of car I like."

This is obvious from his car collection. He has a Caterham Roadsport that's he racing in a French series, a 2008 Subaru WRX (his wife's) and, our favourite, a first generation Peugeot 106 Rallye from 1993 with the 1.3-litre engine.

Feedback from 4C gets his seal of approval

He says good steering feel is for generated by the tyres as much as the car. The positioning of the steel 'belts' that run though the tyre are key. "Changing one degree of angle can change a lot in the steering feel," he says. Shame that's nothing us citizens can play with...

We ask him about replacement tyres. How do you know which tyres will suit your car best? If they're still being made, then the tyres that were developed for it, he tells us predictability. Markings, such as Porsche's N1,N2 etc, let you know. And if the tyres aren't being made any more? Sadly there's no special intel here other than recommendations from owners via word of mouth or on forums like this. Although he does say that someone slating a tyre for one car doesn't mean the same exact tyre won't perform brilliantly for another model.

Fascinating stuff and proof, yet again, that the rubber bits connecting your car to the road are much overlooked when it comes to dictating how it behaves.