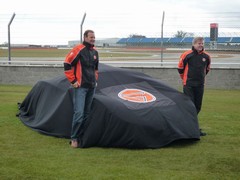 The existing Farbio GTS range will be rebadged Ginetta under a deal that leaves former Farbio boss Chris Marsh (of Marcos fame) leading the road car operation from its existing home in Bath.

The move is a significant expansion of the Ginetta product portfolio, as all three Farbio models will be taken under Ginetta's wing - the GTS, GTS350 and GTS400. It also gives Ginetta access to an in-house carbon fibre component production facility for the first time. 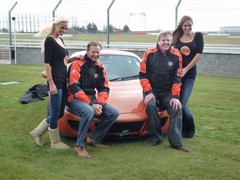 The GTS is a carbon bodied supercar currently powered by a 3.0 Ford Duratec V6 and six-speed box mounted behind the driver. It is available with a variety of power outputs from 260bhp in normally aspirated guise to 410bhp for the supercharged GTS400 version. Prices range from around £60K to £70k, and that is not expected to change in the short term.

PH's own RacingPete witnessed the unveiling of the first Ginetta badged version at Silverstone today, a top-spec supercharged model that the new owners have chosen to call the Ginetta F400. (See pics.)

Pete grabbed a few words with Ginetta boss Lawrence Tomlinson, who said the new marketing focus will be on maximising sales in the UK, whereas previously Farbio concentrated on Japan and the Middle-East. There are also plans afoot to homologate the car for use on the road in the US, with a team from Ginetta flying to the States to begin the certification process next week. 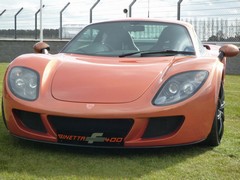 The new acquisition has not affected Ginetta's plan to create road-going versions of its G40 and G50 racers, but these will remain hard-core track-focused cars. The GTS range consists of 'proper' road cars that can be enjoyed on the track.

Tomlinson also has plans to further develop the GTS range, telling Pete the chassis is potentially good for up to 650bhp, so a much more potent Zetec-engined version could be on the cards in future.