From SUVs to snowball fights, the famous hill climb saw more than its usual 156 twists and turns... 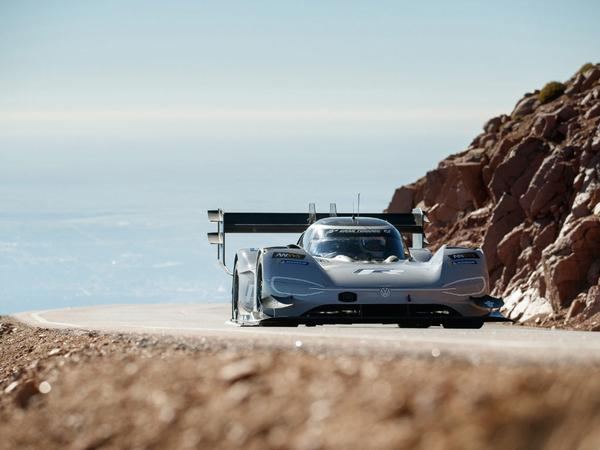 The 96th running of the 'Race to the Clouds' on the Colorado mountain featured a number of records being broken, with Rhys Millen using a largely standard Bentley Bentayga W12 to obliterate the production SUV record held by rivals Range Rover.

Despite having to deal with mist and damp patches in the early portion of his run, Frenchman Dumas stormed up the 12.42-mile hill climb in Colorado in 7 minutes 57.148 seconds, averaging 90.538mph on the 156-turn course. That was enough for the 680hp ID R Pikes Peak, which is powered by twin electric motors, to eclipse Loeb's time of 8 minutes 13.878 seconds, set in the 3.2-litre twin-turbo V6-engined Peugeot 208 T16.

Volkswagen's stated goal when entering Pikes Peak was to break the electric course record of 8 minutes 57.118 seconds, set by Rhys Millen in the Drive eO PP100 in 2016. Recruiting Dumas, who has won the event three times in the past driving for his own team, was a key part of that.

While the ID R Pikes Peak displayed blistering pace in practice, there was considerable doubt about Dumas's prospects of setting a record, with rain and mist sweeping across the mountain shortly before his run, which was delayed by more than 40 minutes after a motorbike rider crashed on the course.

Describing the drive, Dumas said: "The first sector was very good. The second sector was quite humid and foggy, and the third was very fast. The car was good, and very fun inside. I just enjoyed pushing, and all was right."

Dumas, who has won Le Mans outright in Audi and Porsche LMP1 prototypes, called the ID R Pikes Peak car "the most impressive he has ever driven in competition." He added that he could have gone even faster in dry conditions, claiming that he lost "four to five seconds" in the middle part of the course.

European Hillclimb championship ace Simone Faggioli clinched second place, despite having never completed a full run of the course before the race. Driving a Norma M20 SF PKP prototype, the Italian stormed up the hill in 8 minutes 37.230 seconds - the third fastest time ever recorded on Pikes Peak, behind Dumas and Loeb.

While Millen saw his electric hill record beaten by Dumas, he did put his name to a new one, charging up the hill in 10 minutes 49.902 seconds in a Bentayga W12. That knocked a massive 1 minute 45.608 seconds off the previous mark, set by Paul Dallenbach in a Range Rover Sport in 2014.

Still, it wasn't all bad news for former overall winner Dallenbach. Competing in the hill climb for the 25th time, the Colorado resident won the Open Wheel division in his mightily winged PVA Dallenbach Special, although he missed out on the division record.

There was also a new record set in the Open Class, with Peter Cunningham's time of 9 minutes 27.352 seconds in an Acura TLX GT eclipsing his previous record from 2017 by more than six seconds. He also finished third overall.

A heavy storm that enveloped the climb meant the later runners were only allowed to compete a shortened section of the course after a long delay, due to snow on the upper reaches of the course and the finish area. It also meant the drivers who had finished were stuck at the summit for far longer than expected. They passed the time by staging a snowball fight...