achieved fame - or should that be notoriety? - last year when it featured in

. Now the first Arabian sports car manufacturer has announced the latest addition to the range, the Fenyr SuperSport. Another catchy one. 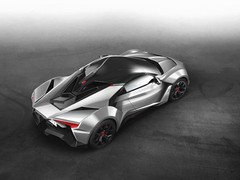 But before we get too cynical, have a look at what's underneath the Fenyr's, um, distinctive carbon body. It's powered by a Ruf engine, a 4.0-litre twin-turbo flat six with 900hp and 885lb ft. The gearbox is a seven-speed dual clutch automatic and W Motors claims 0-62mph in less than 2.7 seconds and a top speed "exceeding 400kph". This could well be a flat six car faster than a 911 Turbo S..

Beyond that there aren't many details yet. We know it uses an aluminium chassis, there will be 25 built per year and Magna Steyr are reputedly involved somewhere in the production.

Price? Probably quite a lot of your chosen currency given the spec and exclusivity. But given there should be boutiques in Miami, Shanghai and Dubai by next year, it will be easier to get hold of one than ever before!