Jacques Villeneuve's 1997 F1 Championship prezzie could be yours

Surely few F1 fans can forget Michael Schumacher's attempt to 'block' Jacques Villeneuve's ambitious dive-up-the-inside at Jerez in 1997? As a result Herr Schumacher received a tremendous bollocking from the FIA and was stripped of his second place in the world championship. Further to this, his failure to finish the race handed the title to the Williams driver. 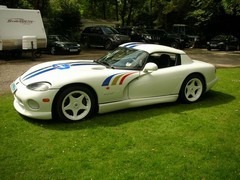 Not long afterwards Williams' principal sponsor, Rothmans, asked American power-merchants Hennessy to build a Dodge Viper especially for their man - which toured with him at most of the 1998 World Championship rounds.

This is it. It's rather... er... white (apart from some graphics and the lamentable blue wheel and hand brake handle), which it has to be said probably isn't the best colour for a Viper, but then again Villeneuve won't have complained about that when it turned up on his doorstep. He will probably have been cheered somewhat by the fact that the car was free, and furthermore that in its day there will have been very few cars on the road which could have shown it a clean pair of heels. You'd still need a very serious piece of kit to keep up with one today, come to think of it. 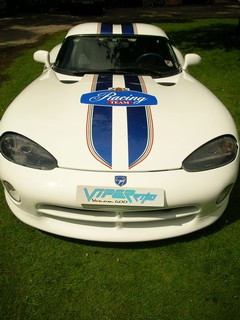 With a reputed - and entirely believable - 607bhp on tap and probably more torque at tickover than a lot of supercars develop deep into the rev-range; this will still be an extremely fast car. As such, the asking price of £39,995 seems like decent value even before you ascribe any extra value to its celebrity provenance.

On the downside it suffered a wee prang at the hands of the previous owner who managed to back it into a tree which destroyed a rear three-quarter panel, a wheel, and a suspension upright. However this work has supposedly been carried out to a high standard and the car is now ready to go hypercar- hunting.

Described by the vendor (who has a history of dealing with Vipers) as 'horrendously quick - too fast for the roads' and with no ABS, no traction control, and no... anything of that nature, do you feel lucky? Well, do you?

And what value would you put on its history?