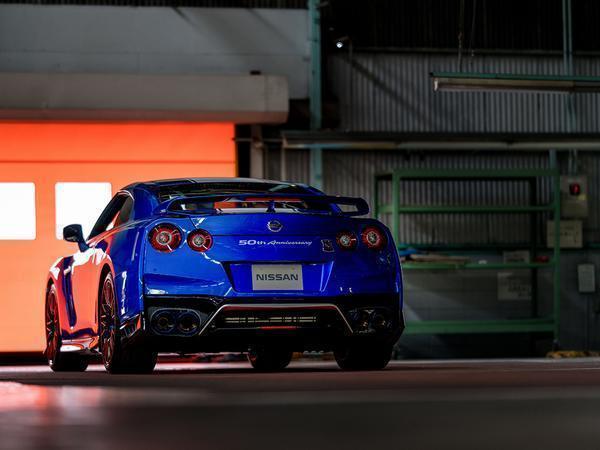 Nissan has confirmed pricing and availability for its limited-run 50th Anniversary GT-R. Only 50 examples of the car will be made available to the European market, with just 18 of those coming to the UK in right-hand drive form. If you can’t live without a Bayside Blue GT-R in your garage when deliveries commence in August, then, you’d better move fast.

And extend your overdraft. The exclusive Nissan comes with an RRP of £92,995, although the manufacturer has also announced a dedicated “50th anniversary-themed” finance campaign for both it and the £38,995 370Z 50th Anniversary edition. This, unsurprisingly, involves a lot of fives, featuring 5.0 per cent APR PCP over three years with a £5,000 Nissan Finance Deposit Contribution and a £500 servicing package over the first two years. High five.

Shinichiro Irie, GT-R program design director, said of the car: “The Nissan GT-R has been the icon of our company’s driving performance for the past half century. We were highly motivated to ensure that the GT-R 50th Anniversary Edition stands out. While the exterior and interior changes may seem subtle at first glance, they’re still impactful, especially with the new paint schemes, keeping the car’s lines and overall presence modern and edgy.”

Picture a Nissan Skyline GT-R, and what do you see? Is it an R34, in Bayside Blue? While that won't be everyone - it's a Gunmetal Grey R32 here, for example - there can be little debate that, for many, that colour and that generation of Skyline is the most memorable GT-R.

No further excuse needed, then, for Nissan to bring back Bayside Blue - or Wangan Blue, as it's also known - for the 50th Anniversary GT-R. Revealed alongside a MY2020 NISMO (more on that shortly) at New York, the 50th project has been pitched as one where "engineers challenged themselves to find undiscovered performance potential while still making sure the car can be enjoyed by drivers at any level."

GT-R chief product specialist Hiroshi Tamura went one step further, describing it as "not about chasing a power figure, but creating a new GT-R, where no aspect has been overlooked. This is appropriate to celebrate the GT-R 50th anniversary."

So what's changed? The legendary VR38DETT V6 has been gifted a pair of new turbos, said to increase low-rev response thanks to an abradable seal and a five per cent increase in efficiency. Given the explosive turbo lag is actually one of the GT-R's most endearing aspects, a challenge and something to exploit, let's hope the improvements haven't dulled the sensation too much. Nissan reckons the turbos "provide even sharper engine response in and out of corners, making the driving experience more rewarding and richer than ever before."

In addition, this GT-R gets new exhaust manifolds with "optimised turbo flange attachment points" (it says here), which are meant to make for easier tuning and servicing. The titanium exhaust is also something not previously seen on a standard GT-R, and other areas have been treated to yet more tweaks: suspension changes aim to bring greater stability and comfort, the steering has been revised to be more precise and the brakes have an upgraded brake booster - the result of that should be improved initial response and performance, because the booster engages with less pedal stroke than before.

Perhaps most interesting of all the changes, though, are those to the dual-clutch gearbox. Apparently R Mode is now for road and track, with 'aggressive' downshifts possible with the ABS engaged and an adaptive control that can change the shift pattern depending on how you're driving. Given the gearbox can sometimes feel a little old against new alternatives - understandable, really, given the R35 was launched in 2007 - these sound like worthwhile changes.

The cosmetic tweaks offer less to talk about, but should be mentioned. Alongside Bayside Blue with white accents, Pearl White with red and Super Silver with white will also be available. All Anniversary cars get a grey interior; according to Nissan it's "reminiscent of the atmosphere of the night sky after the twilight hour" - we kid you not. It's a pretty familiar GT-R in all honesty, only with some more badges, Alcantara and embossing.

In the US, the 2020 car will be sold alongside the Premium, Track Edition and NISMO (we are getting to it soon, honest). As for the UK, we don't know yet (and there were very few 45th Anniversary cars over here), though there's surely going to be some demand for a 50th special, so stay tuned.

That new NISMO, then. Just in case there hadn't been enough GT-R dorkery in your Wednesday morning. Nissan's press information is a joy to read, talk of being "designed for a pro, built for everyone" and seeking to improve "what was essentially already mechanical perfection". As a result, not a great deal has changed - this still being 600hp and in the region of 1,700kg, despite 30kg being shaved - though there are one or two interesting updates nonetheless.

While the suspension, steering and gearbox revisions from the standard car have also been employed here, the NISMO benefits from standard ceramic brakes (410mm front discs, 390mm rear), GT3-esque front wings with scalloped vents for downforce, lighter forged Rays wheels, Dunlop tyres that increase the contact patch by 11 per cent and seats that better support your shoulder blades. We did say it was nerdy...

According to that man Tamura, this 2020 car has brought the GT-R NISMO "to a new level, with enhanced engine, handling, braking and aerodynamics." Which sounds like quite the promise, hopefully something we can hold him to in due course - expect UK pricing and launch info shortly, presumably with the rest of the 2020 range. For those that can't wait, however, the GT-Rs are plentiful and varied in the PH classifieds. This NISMO has more than £20k off its list price with just over 1,000 miles on it, and this 2017 Prestige looks to have been cared for impeccably - it's up for £67,000.