Great and white. But this is no shark. This is the

and we're about to explain why it's a very special British sports car indeed. 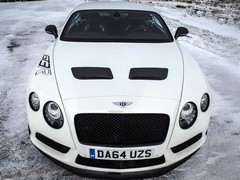 Shy? Retiring? Neither of those things...

The performance seems a great place to start, with a whopping 600hp available on overboost. Keep the loud pedal planted beyond 15 seconds and you might, or might not, notice the output drop to the default 580hp. In a watershed moment even that is more from the V8 than from the base-model W12.

Letting the Bentley boys loose with new pistons, new turbos, and lots of recalibration make this version of Audi's V8 the best yet. Although it's not just the 10 per cent increase in output over a 'normal' Continental GT S V8 that marks the change. There's the incredible noise too, the titanium exhaust system delivering tone, burbles and a seemingly natural popping overrun able to melt any cynic's heart. From the bassy induction to a sonorous exit, it's one of the most dramatic soundtracks you'll ever experience. More AMG than Bentley, it has virtually nothing in common with a stock Continental. 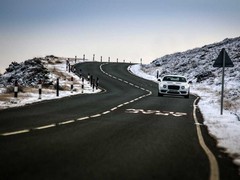 Well, it's four-wheel drive at least

But the figures and the powerplant aren't the end of the GT3-R's transformation. The industry-standard ZF eight-speeder is as snappy as ever, and has shorter ratios over stock. A reduction in final drive from 2.85:1 to 3.50:1 means top speed is down a little at 189mph, but the 0-62mph sprint is just 3.7 seconds.

Thanks to this incredible thrust, it's becoming increasingly hard to believe that the GT3-R is almost 2.2 tonnes (or four and a half Caterham 160s). Sitting in the custom trimmed and significantly lightened Bentley bucket seats, the illusion that you're driving a car as small and as light (all things relative) as a Nissan GT-R is artfully maintained. As you might expect, given the power and the weight, the braking system is one of the craziest to ever be fitted to road car. Carbon ceramic, naturally, and blessed with the biggest discs ever to be fitted to a production road car. They're 420mm in diameter (as big as a 17-inch wheel) and gripped by an eight-pot caliper. Amazingly, the feel at low speed is still delicate and as deft. 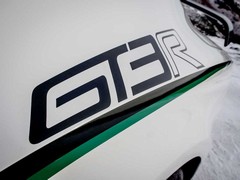 Stickers from the 911 GT3 RS school of subtlety

Powerfully built
This is undoubtedly Bentley's sledgehammer, albeit unexpectedly precise. With concentration and confidence on the part of the driver you can place it inch-perfect through any hairpin bend in a way you'd never have anticipated. There's an element of GT-R comparison due once again. Like the big Datsun, this Bentley benefits from some big axle weights and enjoys a ridiculously large footprint of sticky rubber with which to distribute its instant and overpowering levels of torque.

On the snow-strewn corners of the Horseshoe Pass in North Wales, the GT3-R is outrageously quick. The levels of grip and traction being far, far in excess of anything that could be considered legal or morally responsible.

Body control is superb and, especially when you consider that extravagant, SUV-like kerb weight. Balanced and poised to attack from any throttle position or setting, the GT3-R demolishes set-piece hairpins and flicks between alternating bends like a heavyweight boxer bouncing from toe to toe. 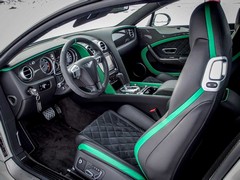 Not exactly pared back and minimal in here

Dab of you know what

While the steering feel during these moments could never be compared to a McLaren 650S or Ferrari 458, there's none of the luxury car remoteness you might expect for a breathed-on Bentley. If you're uncouth enough to lift the gas and throw her in a bit sideways, then that's exactly what will happen. Thanks to the rear-bias of the Torsen-equipped four-wheel drive power train you'll even get some impressive slides on the way out too. We're sure the caddish Bentley Boys of the 1920s would approve.

But if you thought such behavior, racing stripes and GT3-R stickers were a bit showy and unsubtle for a Bentley product, just wait until you see the cockpit. While the quality is beyond reproach, from the back of every organ-stop switch to the depth of the perfectly-formed and matched carbon-fibre panels, the colouring is a little loud. Stitches, stripes and panels all echo the external highlights and delight, or infuriate, the driver at every glance. 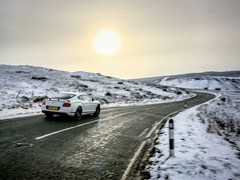 No Californian sunshine for our drive

The shift paddles are another bugbear, being only available to touch from the top-half of the wheel. You're best off to leave the transmission lever in D for driving and S for hooning, though that's no insult to the snappy changes you can initiate from the oddly placed paddles.

As we said at the start, this is a special car, and definitely a sports car. Like a Nissan GT-R, but with a century of upper-class breeding, a hipflask full of single malt and a pastel-coloured Savile Row suit. Indeed, of 300 cars to be built, and 50 heading for the UK, only two are still available to buy as we publish this story. It's not just a lairy British bruiser of exceptional price taggery, but also a toe in the water for Bentley. And proof of intentions beyond that SUV.