A Continental too far, or the 710hp making of Bentley's GT?

Thanks in no small part to a certain off-roader, Bentley is doing rather well at the moment. Indeed European sales were up 56 per cent in 2016, with the UK remaining Bentley's third biggest market. And, well, the customers seemingly can't get enough of what the current range offers. Not only have buyers been clamouring for another Supersports since 2009, one of the first Bentaygas was painted two colours and the Mulliner bespoke department is busy. The point is simple: this may not be traditional Bentley, and there may be some people who don't especially like it, but it's proving far too popular to ignore.

Bringing us to the new Supersports, all 710hp, 750lb ft and 2,280kg of it. Not going to miss it, are you? The car makes no apologies for being Bentley's self-proclaimed ultimate in performance in luxury; that might be through a tri-tone interior (seriously) or through thundering to 62mph in 3.5 seconds. Or that spoiler, perhaps. This car isn't shy about advertising its credentials, because that's what Supersports customers are after. Also, if buyers can be persuaded to spend more money at Bentley than somewhere post-sale then all the better... 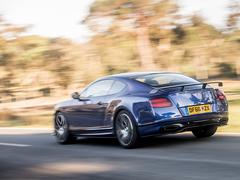 While the looks may not be to all tastes, there are a few worthwhile and interesting tweaks. The torque vectoring (alright, it's brake nibbling really) from

the GT3-R is here

, as is a thoroughly reworked engine: the intake system is overhauled, the two turbochargers are new and the cooling has been modified to deal with the additional stresses of this power. That phenomenal wall of torque is on offer from 2,050rpm to 4,500rpm, offering a strong indication of how the Supersports delivers its performance. And for those worried about the ZF automatic handling those outputs, don't forget that

is tanking along with 811lb ft.

On the road the Supersports is initially - and unsurprisingly - very familiar from other Continentals. It's a serene way to make progress, a cocoon of opulence, upset only slightly by that bluff front end carving (or should that be barging?) the air and some rumble from the 275-section Pirelli P-Zeros. But with a (mostly) smooth shifting automatic and a bottomless canyon of torque, the Supersports mooches along as well as it ever has. The damping is very well judged for managing so much mass in all four of its settings, the brakes (with 420mm front discs!) are easy to modulate and the seats are superb. 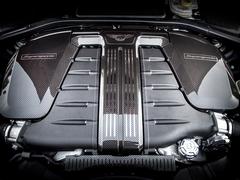 You want to know how it goes though, don't you? It's staggering, in a word. The delivery isn't transformed from other Continentals, it simply now packs even more muscle. A lot more. If there is any lag it becomes irrelevant soon after as that torque peak is there at 2,000 revs. From there it's a sustained and quite violent rush to the redline, the intensity not letting up at all and distant objects suddenly becoming really rather close indeed. It will feel fast whatever you have come from, such is the incongruity of the ballistic, relentless pace with the plush surroundings. And with an odd delay between lifting off and the car actually ceasing acceleration, it can be made to feel uncomfortably fast...

That 710hp makes a Bentley quite brisk is rather a given though. The almighty performance, combined with the Supersports accoutrements, will probably be enough for most customers. It's important to note however that the big Supersports is pretty good fun too. No, seriously. While always conscious of the size and weight, it's rather more entertaining than you might imagine. Funny how 750lb ft and a greasy road can enliven a car... Oddly yet endearingly, the Conti is really responsive to both throttle and brake into and through bends. On exit too the 'torque vectoring' keeps understeer contained and you can sense the car straightening itself out under power. It feels remarkably finessed and honed dynamically for what is a very, very big car - surely the benefit of working on it for so long now. The temptation would be to call the Continental a big TT, yet that does the Bentley a disservice because it's more entertaining than the Audi. 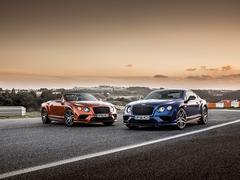 On the same roads in the Convertible Supersports, it's as you might expect: close, but no cigar. Even 750lb ft can't entirely disguise the extra 165kg, the drop-top not quite as rabid in its consumption of gears and road. There's the odd shimmy and shake through the structure too, though certainly not enough to put prospective buyers off. Who cares about that with an exhaust in the open air, right? Certainly nobody in the surrounding eight miles (or thereabouts) will fail to hear you coming, the Supersports overrun cacophony part-shooting range, part-gargling gargoyle and always so, so loud. It's obscene. Whether the noise appeals or not probably says much about your overall view on the car.

With a fixed roof back overhead (and a helmet too), the noise takes a back seat. What returns to the fore on track is, encouragingly, the Supersports' sense of fun. If you can front the bill for tyres and fuel, the Bentley will waltz around a track in a surprisingly adroit fashion. The hydraulic steering is light but confidence inspiring, the car also aided into turns by the manipulation of brakes on individual wheels. Understeer is remarkably well contained - if not eliminated, of course - particularly through the long turn 13 at Estoril. Traction is great also, the Supersports keen to drive out from the rear rather than lurch into power understeer. And it always feels absurdly, addictively fast, even on an old GP track. 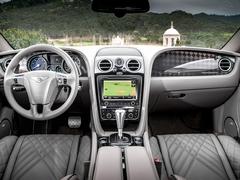 Cast your preconceptions aside then - as a coupe at least, there's plenty to recommend the Continental Supersports as both a driver's car and as, well, something to show off in. Trouble being that there are other cars in this rarefied sector of the market that also deliver across the board, the

being the obvious choice at slightly less money and the

offering a stellar powertrain - one far more exciting than both Brits - for a little more than the Supersports.

Regardless, there seems little doubt that Bentley will shift all 710 (see what they did there?) Supersports; it offers even more, everywhere, of what has made this model so popular. And while some of those upgrades won't be universally popular, both its stupendous performance and well sorted dynamics are most certainly worthy of praise.