The future of urban personal transport? PH drives the BMW i3 to find out

So here it is, finally. Freed from the

, we're finally able to drive a

extensively for the first time. This is the real car, in the real world (ok, Amsterdam) and with real journos in the seats. 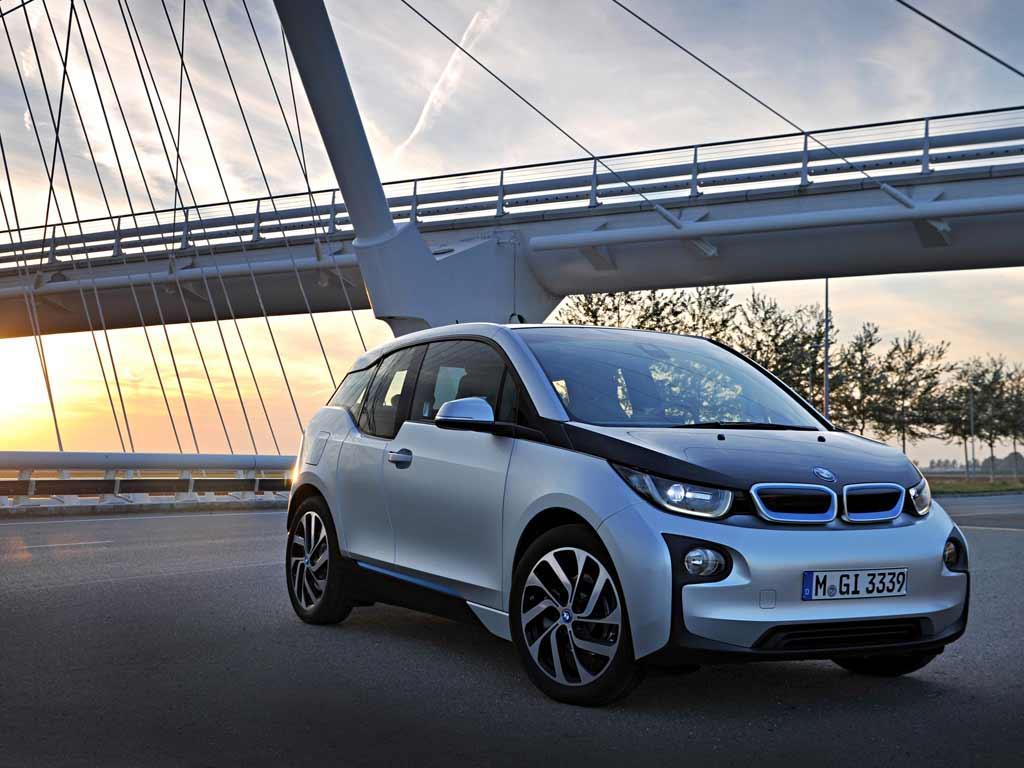 And do you know what? For the large part, the car is marvellous.

First though, a quick refresh of the i3. The i project started back in 2007, its aim to shape future urban mobility with an entirely new project as migration to cities continues. A customer testing programme involving the Mini E and the 1 Series Active E covered more than 32 million kilometres with 1,000 people, attempting to find out the driving habits of a typical EV user. The i3 is the showroom manifestation of six years research.

The interior must be discussed first, as it's magnificent. In his teaser drive, Harris described the i3's cabin as 'showroom gold'; it really is a beautiful environment. Familiar BMW controls for the iDrive and stereo remain, but they are accompanied by a pair of gorgeous hi-res displays, the main unit a huge 10.2 inches wide. Everything resides amongst a selection of funky, exciting (and sustainable, natch) materials. 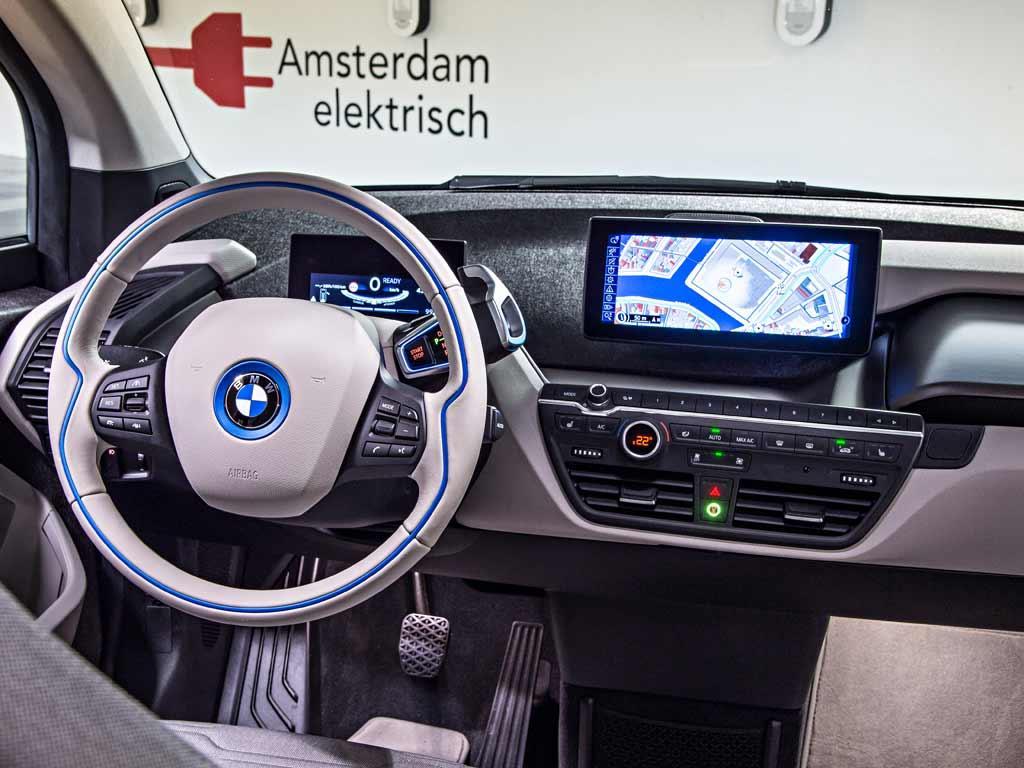 Minimalist, airy interior is a triumph

They give the entire cabin a fantastically modern, minimalist, almost Scandinavian feel, plus it's one that's bathed in light thanks to the vast expanses of glass. BMW describes the i3 design concept has like a loft on wheels, and you would be happy with this in your home.

However, to have reached the interior you will have had to approach it from outside, where the view is less positive. Like said 'loft', it's something you really appreciate once inside rather than for its external aesthetics. The front is good, but the desire to create such an airy interior has created some very tall sides which, when combined with the narrow tyres, give it a rather awkward, lanky stance when viewed from behind. Whether that's an acceptable compromise will be down to buyers, but to these eyes a Vauxhall Ampera is a far more desirable piece of design. 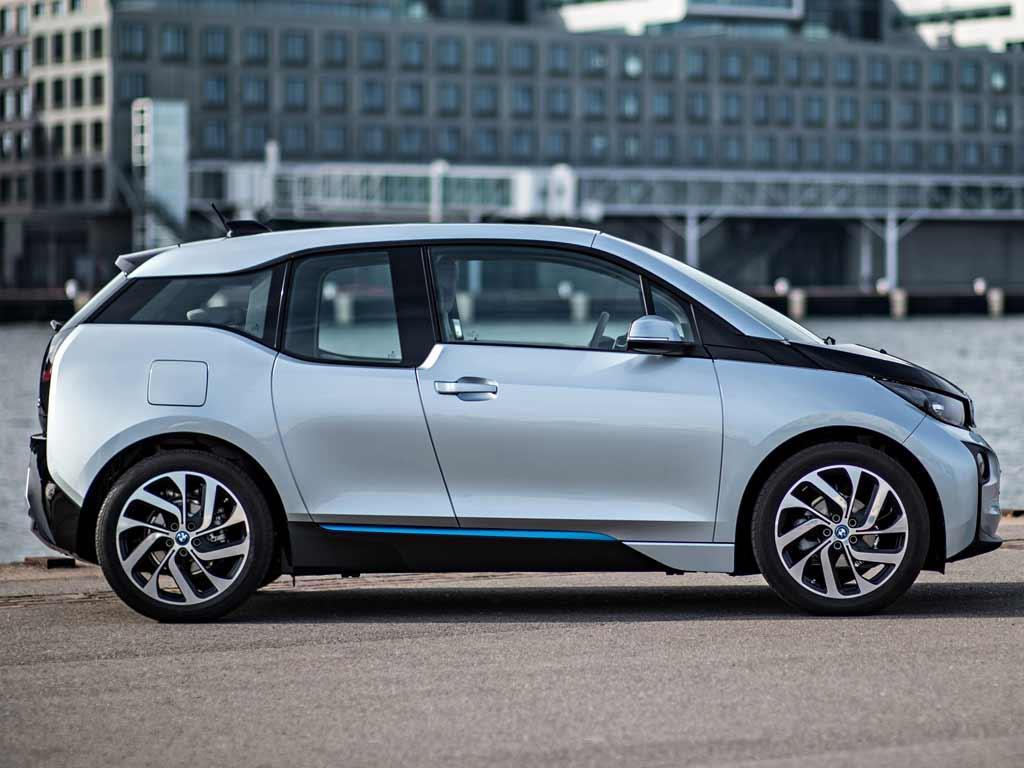 Just think of how good it looks inside...

So then, driving an i3. Aside from the electric handbrake, all driving controls can be found on a chunky wheel-mounted selector that feels great to click around. You move away of course in near silence.

First impressions? Blimey, it's quick. And not quick for an electric car or 'quick, but', just a really nippy little hatch. 0-62mph in a fraction over seven seconds feels right on, the seamless zip away from stationary being maintained strongly for longer than expected.

Moreover, it doesn't feel overawed by the Dutch motorways. The accelerative punch isn't as strong above 60mph but it's far from disastrous. A 50-75mph time of 4.9 seconds proves that. It cruises along quite merrily, the only real noise some wind rustle around the base of the A-pillar. Never did the i3 feel like it was lacking when dealing with frantic A-road traffic. 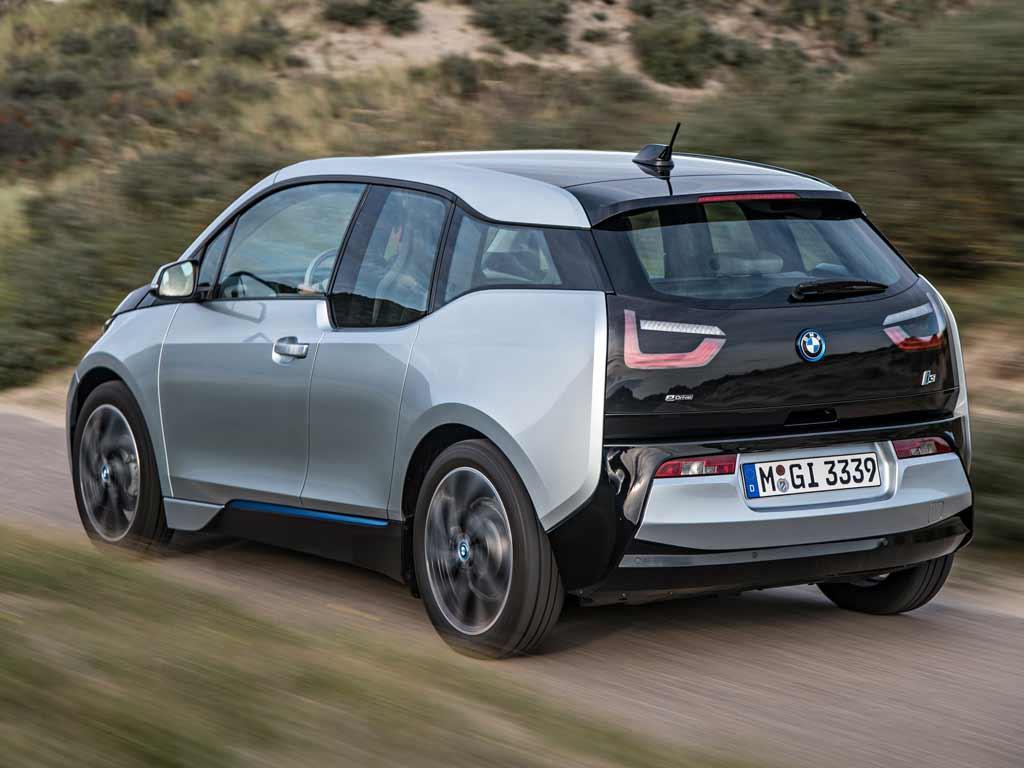 Skinny tyres promise little, but the i3 grips well

But it's the regenerative braking that stands out from the powertrain. The relationship between the throttle, the electric motor and the brakes has just been fantastically calibrated. BMW claims the i3 can be driven with one pedal for 75 per cent of the time, and that feels like a conservative estimate.

There are no surges or troughs in acceleration, just the level of performance your right foot has asked for. But it's the subtleties of braking performance offered that really impress. Initially it's surprising how strong the force is, but you soon learn to finesse your input and approach junctions with a well-timed lift and without ever troubling the brakes. When the middle pedal is required, it feels positive. You'll be amazed how seldom it's in use though.

Immediately on the road, the benefits of that carbon fibre reinforced plastic tub can be felt. The inherent rigidity of the i3's structure gives the suspension a great platform to work from, allowing it to remain both composed and comfortable over some of Amsterdam's rougher roads. Given the car's remit, it could probably be softened off a fraction further, but there won't be any complaints from passengers front or rear. 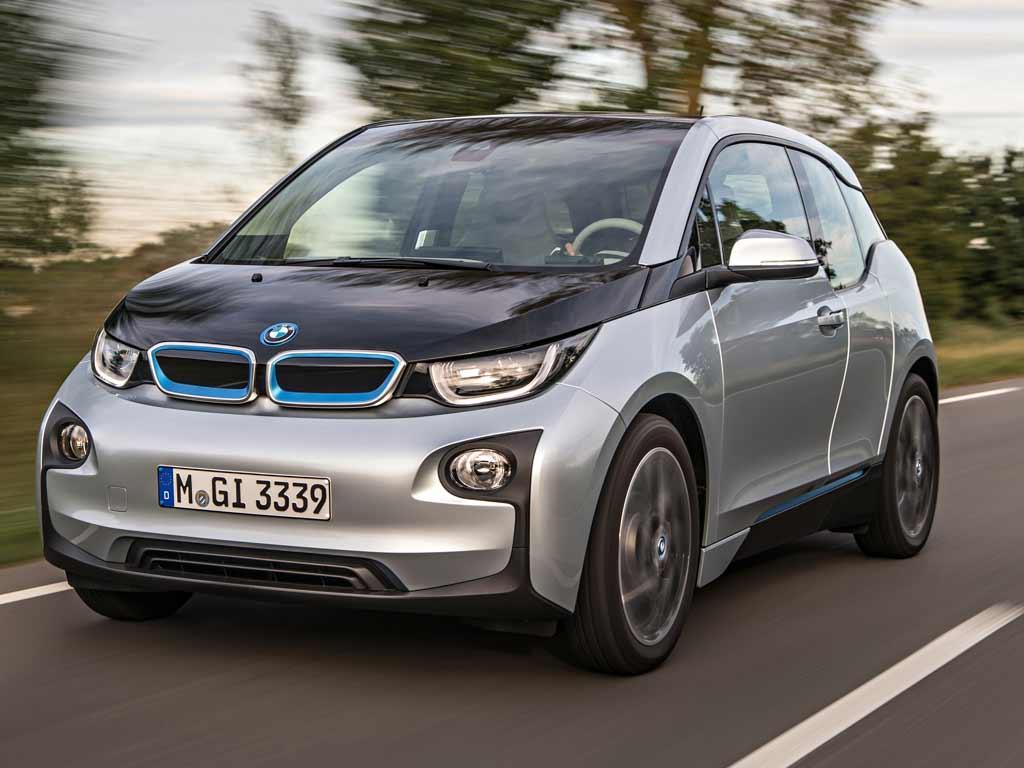 Seeing that tall body ride on 155/70 R19 tyres doesn't promise much for handling. However, the i3 turns in quite sharply and succumbs to understeer much later than its stance suggests. Steering feel is no worse than an M135i, and it's actually a nicer system to use thanks to a rim that isn't absurdly over-bolstered.

But then you remember what the 50:50 weight balance, the 230kg of batteries being mounted low, and rear-wheel drive promises dynamically. Sure, the i3 won't have you up at 5am on a Sunday, but it feels composed and agile, a feeling no doubt augmented by that relatively low 1,195kg kerbweight.

After a mixed afternoon of driving with no real concessions for economy, the i3 was on for a range of 90 miles, bang on estimate. Extended time in Eco Pro + mode, which prohibits air-con and makes the throttle super spongy for the full sweaty eco-warrior feel, would have increased this to comfortably beyond 100 miles. 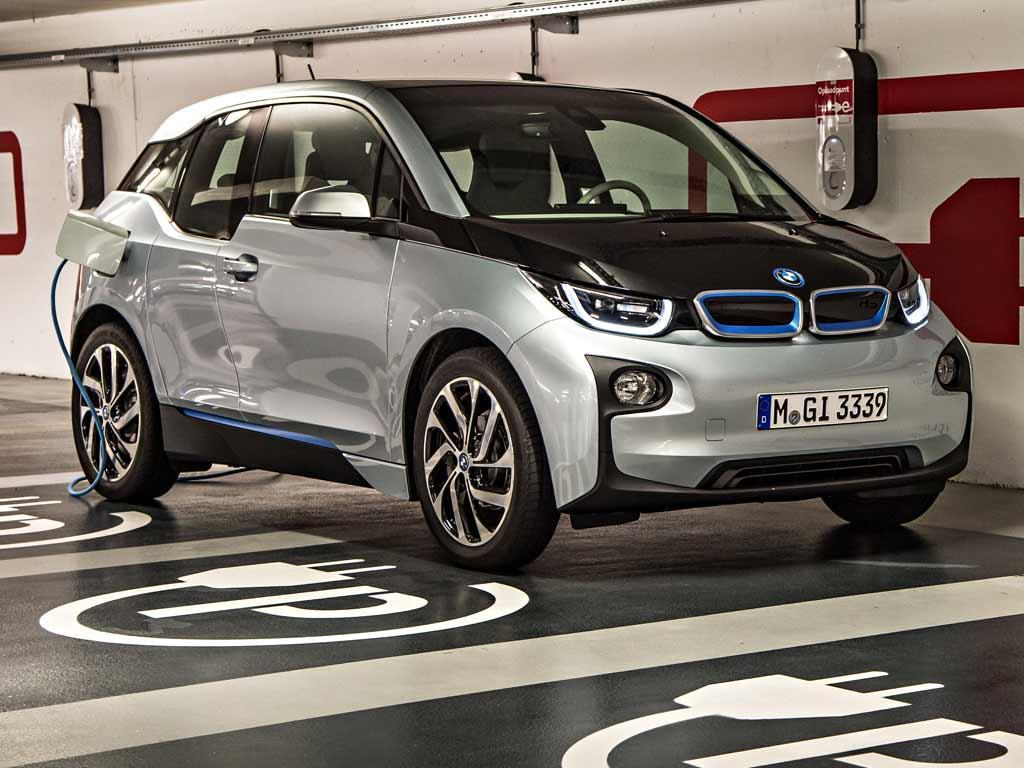 One for the bad parking thread...

But charging must be a problem, right? Not necessarily. We'll detail the full 'BMW 360° Electric' support package in a more detailed separate story, but there are options for a guaranteed charging space, an app that can incorporate public transport into your journey plus the ability to use a 'normal' BMW should circumstances dictate. Buyers can also sign up to a renewable energy agreement to supply their power, and the range extender i3 will surely cater for those most anxious of drivers.

It's hard to come away from the i3 and not be rather amazed at what has been achieved. We've had feasible electric vehicles already, but this little BMW moves the goalposts again as it's actively desirable. Similarly to the Tesla Model S, buyers will want one because it's a covetable object, not solely because it's electric. It was a notable triumph for Tesla in the luxury saloon market; to do it for the price of Prius + is quite a feat indeed.