Z4 versus Boxster has only been going one way for the past 15 years - what's the verdict now? 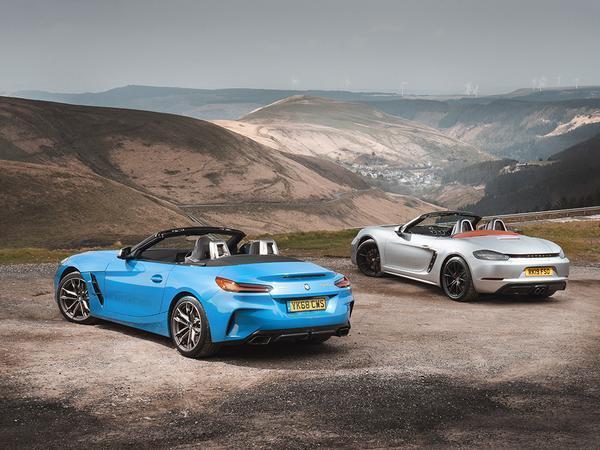 You know how this goes - right? Ever since the Z4’s introduction in 2003 - heck, since the Z3 first arrived in the mid-90s - the Porsche Boxster comparisons have been predictable almost to the point of wearisome. Whatever the BMW could offer in terms of silky straight-six performance and front-engined, rear-drive balance, the Porsche could counter; it being just as fast, more engaging to drive and with even greater brand cachet. It’s easy to see how the verdicts fell in the Boxster’s favour.

Things look a little different now, though. This third generation Z4 is better placed than any other, surely, to surpass the Porsche Boxster. After all, this 718 generation can trace a lot of its important bits back to the old 981, first launched in 2012, and there’s the still-much-maligned introduction of four cylinders to contend with. It’s not a new thing, basically. And who wants yesterday’s sports car?

Moreover, against the familiar old Porsche the BMW is so of the moment that you wouldn’t be surprised if the ConnectedDrive cameras were livestreaming your commute to Instagram. The CLAR (Cluster Architecture) platform is new, the interior and infotainment are new, the design is new and, perhaps most importantly, the focus is new. The Supra/Z4 collaboration has achieved notoriety like no other joint sports car project, and promises much. Combine that with the M2-besting Nordschleife lap, the aluminium suspension bits to reduce unsprung mass and wide tracks and it’s easy to see how now could be the Z4’s moment.

That’s to discover later. First off, however, it makes sense to establish just what kind of defence the £74k Boxster can present, with the odds seemingly stacked against it in a way that seldom happens with Porsches. And even before the Z4’s Misano Blue paint and slightly-more-successful-in-the-metal styling arrives, the Boxster has a couple of problems. The interior might best have been described as sturdy and functional a little while ago; in light of cars like the 992, Panamera and Cayenne, it’s as plain as buttered bread. It does what it needs to do, and is unlikely to cause offence, but neither is it inspirational or especially memorable. When style and image are so important in roadsters, that’s a key point. The Boxster just feels a little samey, to look at and to be in, which could make it difficult to get excited about.

But if familiarity breeds something like contempt for the Boxster’s look, interior and image, then driving it is as satisfying as drinking with an old friend in your favourite pub. Nothing is revolutionary or ground breaking, but you’d happily spend hours and hours doing it. And loving it. The Boxster’s genius, of course, is in being mid-engined - and delivering all the poise, deftness and ability you’d expect as a result - with a forgiving, benign, docile edge that’s not typically a strong point for cars configured this way. It means any corner or any change of direction, from roundabouts to hairpins to long sweepers, is a joy.

In Wales the Boxster is as stellar as it’s ever been. There’s the utmost confidence in it, not simply because of the chassis’ innate ability, but because there’s such cohesion to everything the driver has to interact with. There’s no second guessing any input, just immediate faith in steering, throttle response, traction, grip and body control. You push, the car gives back, to any level required. And it’s fabulous. In contemporary Porsche fashion there’s a level of configurability in the PASM dampers, throttle response, assist systems and PDK gearbox, yet regardless of the setting the Boxster reeks of dynamic class. And sunshine in a mid-engined Porsche sports car is still to be enjoyed. Yes - even with that drab noise. Give it 20 minutes and the stoic interior is about as important as the pub décor being dated - it’s just not what you’re there for.

Swap straight from the Boxster to the Z4 and the latter initially feels a little awkward. To say the least. Where everything in the Porsche feels in perfect harmony, the BMW is disjointed. Though there’s clearly prodigious grip from the front of the car - as you’d hope from a 255-section Pilot Super Sport - the steering’s abruptness, numbness and - since this is a BMW - stupidly chubby wheel make it difficult to judge and approach. The brakes are similar - prodigiously powerful, but hard to modulate thanks to a snatchy and awkwardly sited pedal. Where the Porsche driving experience is polished to the point of unerring accuracy, the BMW’s feels a little haphazard at first contact.

That said, there’s clearly some considerable talent here. Those new underpinnings have given the Z4 an admirable level of rigidity, shrugging off imperfections in the road and not letting its composure be ruffled. That certainly wasn’t the case in the previous car. Combine the structural integrity with damping that actually does what it’s meant to do - not always guaranteed with quick BMs - and the pace that can be carried down a road is remarkable. Once your faith builds to the level where you’re convinced the car will do as you ask, that is. The mushy interfaces would be frustrating in isolation; compared with a car as honed as the 718 they’re thrown into even starker light.

There are unequivocal points of praise, however. This new 3.0-litre, turbocharged straight-six is really very good, punchy at low revs yet really energetic at high revs as well, matched to a very smartly calibrated automatic gearbox. Short ratios make it feel even quicker than the stats would suggest, and you don’t need us to tell you which engine is the more pleasant to listen to. The interior is both modern and usable. It’s probably more refined than the Boxster on the motorway. This is better sorted driver’s car than an M Performance 1 Series, and miles ahead of a TT.

The Porsche is still better, though. We wanted an upset as much as anyone, but not this time - not with this Z4 and the Boxster in this form. The fatal blow is that for all the stuff the BMW does well - and there’s plenty of it - there’s nothing (save soundtrack) that the Porsche can’t claim to match. The fact that it’s 130kg lighter, too, is an advantage that pays dividends across the board.

It doesn’t protect it from grievances about the price difference of course, and these are entirely justified given Porsche’s failure to make its 2.5-litre four-pot any more compelling than in its previous guise. But the fact is that much of what makes the Boxster so good is found in a £45k 718 - it’s not exclusive to the flagship model nor its smorgasbord of options. The Porsche rides more plushly on bigger wheels, delivers better traction on narrower tyres, is faster, more exciting and, by the criteria we care about, the better resolved driver’s car.  What that means, therefore, is a new and much improved Z4 earns some semblance of a moral victory for coming this close at less money - but the overall verdict favours the Porsche. Sometimes the old ways really are the best...