Crazy numbers are something of a forte as far as the

is concerned, and today we have confirmation of another: a new world record for the 0-400kph-0 sprint of 41.96 seconds. 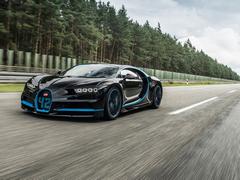 Think about that. 42 seconds to accelerate from stationary to 249mph and then back to a stop again. And in just 3,112 metres. Bonkers. What other cars could even achieve that feat, let alone provide competition? A Veyron Super Sport would be one, and perhaps the Hennessey Venom is another. Any other suggestions are more than welcome...

For some context on just how ludicrous the Chiron's achievement is, take a look at this test of crazy tuner specials that Car and Driver did a decade ago. It was testing cars from 0-200mph-0. A tuned Saleen S7 - a tuned Saleen S7 - making somewhere in the region of 800hp went from standing to the double-ton and back again seven seconds slower than the Chiron went to 249mph and returned to a stop. Seven seconds! What a car. 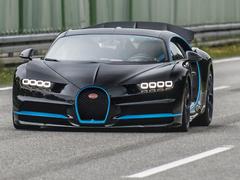 Slammed with the spoiler up? It's a scened Chiron!

The driving was done by none other than Juan-Pablo Montoya, who described the car as "stable and consistent", which sounds like he could have been talking about his last bowel movement. However, he did also add that the braking and acceleration were "incredible", and we'll have to hope a few expletives emerged soon after the interview.

The point? Well beyond proving the Chiron's remarkable performance, this run forms part of the test programme for surpassing the top speed record set by the Veyron SS; that's expected at some point next year. Finally, the record-run Chiron will be on show at Frankfurt and, should you have been waiting for some record-setting kudos before taking the plunge, you're in luck - 200 cars are still available...