The ultimate Top Trumps car adds another string to its considerable bow for Geneva... 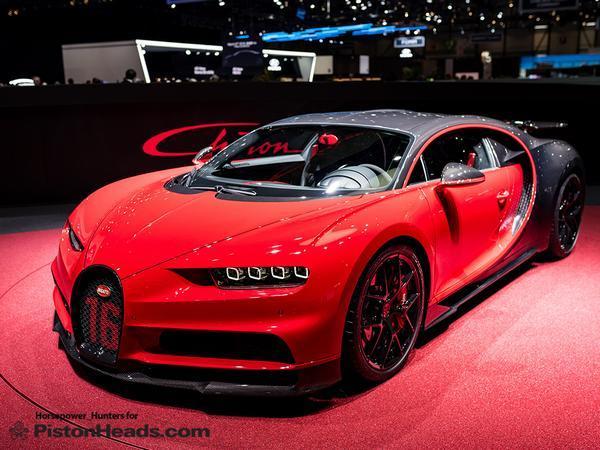 There are more super, hyper and track cars being unveiled at this year's Geneva show than you can shake a selfie stick at, and Bugatti isn't missing out on the party. It's unveiled the new Chiron Sport to the assembled masses, and claimed a small piece of motoring history in the process.

Obviously speed and power aren't lacking in that car though, which explains why the focus with the Sport wasn't on straight line performance but instead on handling the twisty stuff a little better. To help in that regard this car now features Dynamic Torque Vectoring, shock absorbers 10 per cent stiffer than standard, the steering has been tweaked and the rear diff 'optimised'.

A total of 18kg has been hewn from the standard Chiron thanks to new lightweight alloy wheels, lighter glass for the rear window and a lighter exhaust deflector, plus the use of carbon fibre for the stabiliser, intercooler cover and windscreen wipers. There's your history right there, they're the first ever on a production car. Saving 1.4kg (77 per cent) over the standard wipers, they utlise 3D-printed aluminium tips, although there's no mention of the crazy 3D-printed brake calipers we saw earlier this year.

Individually some of these changes may sound negligible, but combined they're said to equal a five second reduction in the Chiron's lap time at Nardo's handling circuit.

Visually the Sport can be identified by its rounded quad tailpipes and a smattering of logos on the sills and centre console, while inside its black leather and alcantara interior and anodised black engine start button and drive selector set it apart. That selector is key here, the idea behind the Sport being that it should drive like a regular Chiron the majority of the time, but offer "an even sportier driving experience... with improved lateral dynamics on winding roads" when placed into its 'handling' mode.

"What was important for us was to leave unchanged the unique character of the Chiron, its combination of ultimate performance, longitudinal acceleration and maximum speed with luxury, comfort and everyday usability." says Stephan Winkelmann, President of Bugatti. And the price for all this? Well, it's €2.65 million.