Can't wait to hear what the Aston Martin Valkyrie's new engine sounds like? Wait no longer... 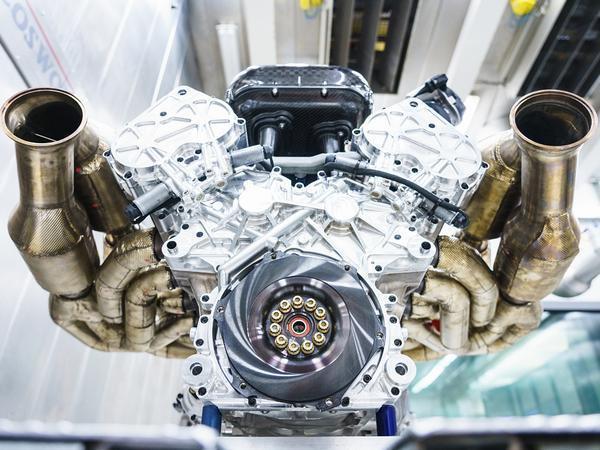 The Aston Martin Valkyrie will only be spotted where the ultra-wealthy live, play and store their automotive investments in air conditioned comfort. So probably not the less salubrious end of Northampton, then. Yet this still feels like an entirely appropriate place to come and learn some more about the hotly anticipated hypercar, specifically the mighty naturally aspirated V12 engine that will provide the internally combusted side of the powertrain.

Is there a more evocative name in British engineering than Cosworth? The firm started out in racing but has a long and distinguished history of working on road-car projects. The part of the company which developed its most famous street-legal motors was split off some time ago and is now part of Mahle Powertrain, but Cosworth remains a major force in engine design. And was therefore an entirely rational place for Aston and Red Bull Racing to come when they wanted to get the Valkyrie engine designed, developed and built.

The brief from project supremo Adrian Newey was simple, if immensely hard. The engine had to be a naturally aspirated V12 - a turbocharged V6 had been considered, but was discounted as not being special enough, it would have to be strong enough to act as a stressed component in the chassis, as in a race car, and it would have to be able to produce 1,000hp while meeting durability standards that no racer would be able to get close to. It was a list that Cosworth MD Bruce Wood admitted was seriously challenging, even with the company's collective expertise, but which he was willing to "bet the farm on."

There will be a more detailed walk-around with the engine later, but first the small matter of discovering whether it has managed to deliver on the headline figure...

The word dynamometer sets me thinking of an oily workshop where heavily tuned Supras and Skylines get strapped to the rollers and are throttle stamped into giving their all. Cosworth's immaculate dyno cells are almost entirely different: like a laboratory for studying engines. The Valkyrie engine that we're going to see running is bolted to a substantial frame with pipes feeding it air and coolant and taking exhaust gases from the exhaust manifolds. The motor is connected to a generator which can produce varying roads. Wood explains that this engine is the second durability test prototype, having just started a 220-hour test cycle, and that today it will be lapping a virtual Silverstone.

The test cell is separated from the control room by substantial double glazing, it's not unknown for development engines to fail spectacularly on the bench, but as the cycle starts the motor's high-pitched note is still entirely clear. The display screens show revs soaring with a brutal speed to more than 10,000 rpm. Within a couple of seconds the power readout has also shown a peak of 1,000hp. Job jobbed!

Next there's a chance to go and have a listen where the pipework carries the exhaust gases out of the building. It sounds amazing, much louder and angrier than it did in the control room, the crescendo still growing well beyond the point where my instincts tell me to expect an upchange. The production Valkyrie will apparently have a switchable exhaust to allow owners to experience its soundtrack with a minimum of silencing. I find myself wishing to be a multi-millionaire with a little more intensity than usual.

Even with the headlines confirmed, there's still plenty more to learn about this remarkable engine, and Bruce Wood is a brilliant tour guide. He is straight from the Gordon Murray school of passionate engineers, wearing a bright floral shirt rather than the usual corporate uniform and with an infectious enthusiasm for both his company and its latest product.

Unsurprisingly, he admits that the road car side was the challenge. "Making an engine that can produce these numbers is well within the realm of what's been done before," he says, "but making one that can hit emissions and durability standards was always going to be far tougher."

The original plan was for a 6.0-litre unit, but this turned out to only produce 950hp, hence the increase in displacement to 6.5-litres. Increasingly tough emissions standards mean that most petrol engines are switching to particulate filters, but these would have added weight and exhaust back pressure, so instead the engine uses port rather than direct injection.

"Direct injection definitely gives you an edge for economy, which is why so many people use it," Wood explains, "but that wasn't really the priority here, and if you want power rather than economy port injection is slightly better, and it also meant we didn't need a GPF."

Longevity has been a huge challenge as well, especially as the engine will also be transmitting loads and forces between the rear suspension and aero and the bodytub of the car it will be directly mounted to. The chosen standard was a 100,000km engine lifespan, the same Mercedes says that the F1-derived powerplant in the Project One will manage, with the expectation that any Valkyrie given routine maintenance will be able to meet this target; however small the chance an owner is likely to use it so much.

"It created a debate in terms of both materials and weight," Wood says, with the decision taken to - mostly - stick with conventional and well-proven metals. Alloys are aircraft grade - the cylinder head is cast in an aerospace oven - connecting rods and valves are made from titanium. The engine block has been plasma sprayed for durability as well. Pretty much all of it is being made in-house by Cosworth in Northampton.

And if anyone does manage to reach 62,137 miles: will the engine be space-grade scrap? "Our expectation is that at 100,000km it would be replaced," says Wood, "that's not to say we think there is going to be a hole through the side of it, but our expectation would be that a lot of the components would be worn out. The reality is that if anybody got to that point we'd take the engine out, strip it and crack test it. If the block was fine and not excessively worn there would be no reason not to rebuild it with new pistons and valves."

Directly mounting the engine to the bodytub created some serious refinement issues. The engine uses cog driven camshafts - chains wouldn't be able to cope with the 11,100rpm limiter - and the noise that these will generate at higher loads meant the decision was taken to move them to the rear of the engine rather than the front, adding a small amount of extra weight and triggering a heated debate with the obsessive Newey.

"That was quite an argument with Adrian," Wood remembers, "he said it would be lighter and shorter if we put them at the front, which it would be, but then nobody would be able to spend more than five minutes in the car." Despite the change, the total weight of the dressed engine with its ancillaries and exhaust manifolds is just 206kg - only just outside Newey's 200kg target. For an indication of how obsessive the weight saving on the project has been, lacquer for the carbon fibre air box will be optional, doing without it saving a claimed 80g.

The Valkyrie is going to have an electrical side to its powertrain as well, and we will have to wait for details as to the contribution the hybrid system can be expected to make. It will definitely be a minority partner, though, contributing through an electrical motor located between the V12 and the gearbox, with Aston's chief Valkyrie engineer Fraser Dunn saying that there will be some circumstances where the car will be able to operate purely electrically, including - intriguingly - when travelling backwards, reverse being electric-only.

Valkyrie details will trickle out ahead of the car's launch, but it's already clear that - like the Mercedes Project One which is being developed less than 30 miles away - it is a demonstration of British engineering expertise. When asked about the rivalry, Bruce Wood stays diplomatic, but leaves no doubt which side he's on: "I think that the Valkyrie is a very personal expression of Adrian Newey's vision of a car, whereas I'd say the Project One - which I'm sure will be a magnificent vehicle - is less an individual's view and more of a corporate one."

Still, in the sad aftermath of the end of the Bloodhound project, here's a reason to be cheerful.