When Codemasters brought its first F1 title to consoles six years ago, fans of the sport rejoiced. After nearly half a decade without a release, they finally had a fully fledged Formula 1 game ticking all the right boxes. Somewhere along the way though, things seemed to take a wrong turn for the franchise. F1 2014 received an underwhelming reception and whilst last year's iteration of the game improved in several key areas, it still lacked the depth to keep players engaged in the long run. 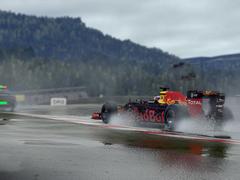 F1 2016 looks to get the franchise back on track and to that end, the focus is clearly immersion. There's a new 10-season career mode, which sees the player design their own helmet, select a driver number and build affiliations with teams to ease their future progression up the grid. As in previous titles, you'll find yourself heading to the paddock or relaxing in your motorhome between races, although they're now far more immersive environments, you may even spot famous faces such as Maurizio Arrivabene or Christian Horner mingling in the background.

Playing through a full race weekend has taken on a new sense of purpose as well. Practice sessions providing the opportunity to truly learn the track by guiding your car through a series of gates, rather than simply following a projected racing line to avoid ending up in the gravel. Before the race itself you'll drive the formation lap, keeping your tyres and brakes at optimum temperature to ensure the best get away possible. And once on the grid your ability, or lack thereof, to master launch control can give you a crucial advantage into the first corner, or throw away that extra place you fought so hard for in quali. All of these touches combining to not only give the player a real sense of investment in the success of their character, but also a tangible sense of accomplishment when that success is achieved. 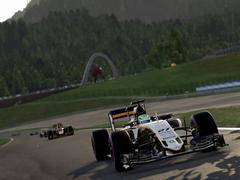 The racing itself also benefits from new levels of depth. The excellent handling model from F1 2015 remains, the cars behaving more similarly to their real-world counterparts than ever before. Read up on our recent experience of

to put that 'flat car' and 'short corner' theory into (virtual) practice. AI drivers will now break down and crash, bringing out the safety car. And when you find yourself in their position, a new damage model includes your wheels flapping about on their tethers as your car disintegrates against the barrier. It's in these situations however where F1 2016's one major weakness is most apparent, as, although for the most part the visuals are solid, graphically it is not the most refined title, particularly when compared to contemporaries such as Forza, Project Cars or even Codemasters' own Dirt Rally.

Despite this, F1 2016 is certainly a huge step in the right direction and fans of the sport can once again look forward to a game which will keep them entertained for longer than a rain delay at Silverstone. Release is scheduled for August 19 on Xbox One, PS4 and PC, keep an eye out for the full PH review then.