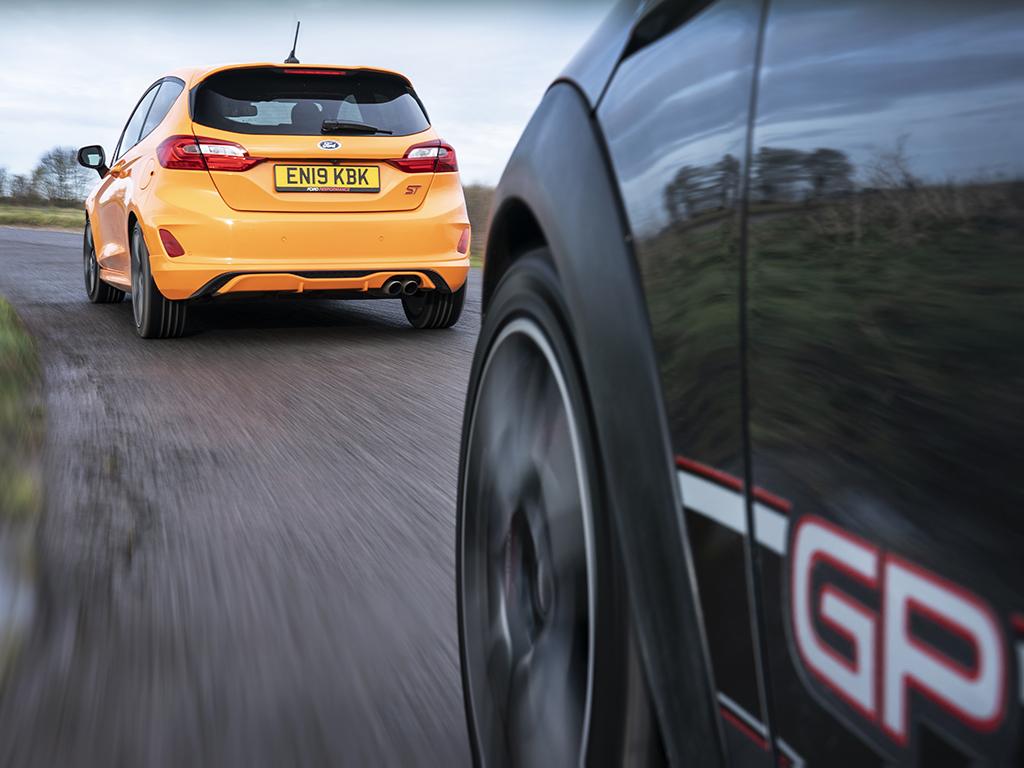 It speaks volumes about the Ford Fiesta ST's value for money when the most serious threat to the Performance Edition's reputation comes from the stock offering. Forking out £26k for an ST with coilovers and orange paint does sound a bit mad, what with a 'regular' Performance Pack'd car already offering so much for several thousand pounds less. But we wouldn't be so quick to lament it; as is often the case with these things, the range-topping Fiesta is worth more than the sum of its parts. You're paying as much for the increase in driver reward and track ability as you are adjustable stainless-steel dampers and lightweight 18-inch wheels.

The transformation - and increased asking price - has us drawing comparisons with the last Mini JCW GP for several reasons. The GP2 was a £28,790 hatchback in 2013, which resulted in plenty of guffawing. It was a figure so ambitious that this 218hp two-seat hatch was squeezed up against BMW's six-pot M135i and Volkswagen's 300hp Golf R, which made for a pretty sticky wicket. The GP looked like a lot less car for the money because it literally was - but today used examples can be had for under £20k, and it's not like the allure's worn off. On the right stretch of B road the car really does provide an additional level of ability; it's lighter and more honed than those alternatives, and endowed with the kind of focus not often found in the supermini segment.

Even six years on from the GP2's launch, there is no diminishment in the looks department. It's a set of numbers away from being tin top racer, with decals, a bonnet intake and rear spoiler all making its intentions clear. Then there's the R56's squat stance (something lost in the fatter-faced F56), with the funky four-spoke GP wheels pushed out into each corner on the lower adjustable suspension and the twin-pipe exhaust system sitting proud in the centre of the diffuser, projecting bass from the turbocharged 1.6-litre motor. Unless you're (still) harbouring a grudge against the BMW-era Mini, it is arguably as appealing as downsized hot hatches get.

So much so, in fact, that the two-seat cabin feels wholly appropriate, although it seems a shame that Mini didn't opt for a pair of true buckets with harnesses. Nonetheless, it feels the more special machine despite being more common than the Fiesta ST Performance Edition - of which only 600 are to be made compared to the GP2's 2,000-car run. Even with its lick of vibrant paint and those 10-spoke alloys, the Fiesta doesn't look a whole lot different from the standard model.

There's nothing to signal that there are 12 adjustable bump and 16 adjustable rebound settings in the suspension, or a standard fit Quaife limited slip differential between the drive shafts. Even the cabin is just plain old ST-3, and while it's hard to argue against the inclusion of top-sped infotainment and a B&O stereo on a long drive, it is a stark contrast to the stripped-out ethos of the GP. Of course it speaks volumes that BMW's press office has included the hardwired Garmin satnav on its heritage car, but the model was always regular Cooper from the front seats forward regardless.

It feels serious on the road, though, with the sound of stones-in-rear-arches and an ever-present tyre hiss thanks to the lack of rear furniture. The Cooper seating position in the R56 is good, too; you're left asking for maybe half an inch less from the base setting, but with the wheel in easy reach and pedals nicely spaced, the GP feels like it means business. Or perhaps that should be busyness - because tight damping and all that negative camber make for a lively, tramlining companion on less than smooth roads. No shock there, but it does mean that the 'Sport' setting, which weights up the electric steering resistance, is a virtual no-go zone; it just ups your correction workload with no added benefits.

Left alone, the steering is brilliantly fast, and the front-end geometry seems to increase the perceived quickness as speed is piled on. Even accepting the R56's agile baseline, the GP2 is darty and enthusiastic, with real positivity that's followed by a near equal loading of all four Kumho Ecstas, so it corners flat with that lovely sense of fore and aft neutrality. Turn in off throttle or with a trailed brake and there's some useful rotation, from which you can apply corrective lock or maintain the motion with a progressively opened throttle. It never feels snappy or out to surprise you, so despite the initial hyperreactivity you can really get on top it - and savour being there.

What makes the GP really special, though, is how the chassis and engine are so well matched. The four-cylinder unit has a smooth delivery that builds and builds to the 6,000rpm peak, projecting a coarse tone and wanting for an upshift from the Mini's tactile six-speed gearbox only when approaching the redline. This helps make the car a brilliant blend of predictability, adjustability and - without question - rapid cross-country pace. The 6.3-second 0-62mph time only tells half the story because, once rolling and fully wound up, the 1,160kg GP really shifts.

No that the ST is a slouch. The talents of the three-cylinder 1.5 at the heart of Ford's performance Fiesta are well documented, and it's as gruff and torquey as we remember in the Performance Edition. The six-speed it comes mated to is surprisingly similar in character to the GP's 'box, but the Ford engine prefers to haul from its mid-range rather than spin towards the 6,200rpm redline, so you're more inclined to hang on to a cog and let the three-pot lean on its 214lb ft of torque. Outright thrust feels marginally down on the GP2 - or certainly the acceleration lacks the Mini's crescendo - but that's not surprising, given the GP's 95kg weight advantage and extra 18hp.

On some sections of road, however, you can bowl along with more unabated pace in the Fiesta thanks to what's underneath. With both cars' suspension set for the road, the ST is the more forgiving over bumps and cracks and suffers much less with tramlining on our challenging route. Those traits provide the front end with a lower workload, so the Performance Edition skims over cambers where the GP dart to and fro across them. In a straight dogfight on this sort of B-road, cross country pace feels remarkably similar. But on something smoother, the GP2 would likely hold the performance advantage.

It's when you're right up on the Fiesta's limit that it just doesn't quite have composure of the GP2. Through the bends it's keener to cock an inside wheel and make the tail rotate in the process, so the Performance Edition doesn't completely shake off the Fiesta's tippy toe lairiness. Which is no bad thing - but it means the car is more lively while tackling corners at pace. It fights back at the other end thanks to the effectiveness of that Quaife mechanical LSD, which gives greater on-throttle control with its ability to tug the ST around corners from seemingly any entry yaw angle. This dance doesn't have the delicacy of the GP2's smoothed out approach, but it sure is effective. And very often hilarious.

That the Fiesta runs its rival so close, while retaining all its cabin furniture and additional kit, reiterates just how far-reaching Ford's achievement with the latest ST really is. The step-up in capability presented by the Performance Edition is significant enough for it to warrant serious consideration at the niche end of the supermini gene pool - and in a way which doesn't do any significant harm to the first-rate reputation of the standard model underneath the orange paint. Moreover, you could argue that the car is a deleted bench and rear strut brace away from even greater things. But if you're the kind of person tempted by that thought, you might just as well settle on a secondhand GP2, which delivers on its badge promise and then some. Let's hope its fast-approaching follow-up - endowed with even more power - manages to be half as compelling.

Search for a Fiesta ST here