Just when you thought it was finished! Seemingly undeterred by the general sense of apathy at the SEAT/Honda/Renault

, VW has now waded in with its new benchmark: the Golf GTI Clubsport S. 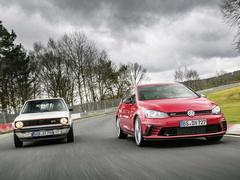 Naturally there are many numbers surrounding this car, but we'll start with the most important: 7min 49.21sec. That's the Nordschleife lap time VW is claiming, beating the pre-production Civic Type R by just under a second and the

- the current production car record holder - by five seconds. Moreover, just in case there wasn't enough confusion about where SEAT sits in the VW hierarchy, that leaves

as the slowest of the four and comprehensively beaten by the closely related Golf. Hmm.

Having been invited by Volkswagen to see this Golf Clubsport S a few weeks back, the event didn't quite go to plan. On that day at the Nurburgring in March, the weather wasn't going to allow for a sub-eight lap in a Golf. Obviously it would have been nice to witness the record broken, but we did at least get a detailed look around the car as well as a slightly more sedate passenger lap. 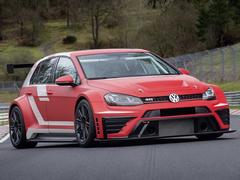 Influence of this plays a part...

Tool for the job

First things first, the Clubsport S is not quite a Trophy-R style hot hatch. Sitting in VW's garage close to the circuit it's still recognisably a Golf GTI, not stickered up or hunkered down in true 'ring warrior fashion. There won't be much doubt once it's on track though, the Clubsport S lap more than 36 seconds faster than VW's claim for a

Peer a little closer you can see this isn't just a GTI. The tyres are Michelin Pilot Sport Cup 2s, optional on the standard Clubsport Edition 40 but standard for the S. There are no rear seats either; the S will absolutely be sold as a two-seater, but only with a rear strut brace and not with the roll cage or harnesses seen here. Is it fair to sell a record car without the exact equipment used to achieve it? Discuss... 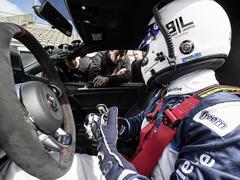 Ditching the seats contributes to a weight saving of around 30kg (along with less sound insulation, no rear parcel shelf and a smaller battery), but more significant to an increase in performance is a power boost. The Clubsport S produces 310hp, up 45hp on the regular Clubsport, as well as 280lb ft. Moreover, the 310hp is a fixed figure, rather than with the transient overboost. The gain comes through a remap and a freer-flowing, larger (and louder) exhaust. The vital stats alongside that time are 62mph in 5.8 seconds, 164mph and a DIN unladen kerbweight of 1,285kg. Add the 75kg required for an EU unladen weight and that's 1,360kg.

Manual labour
Gearbox? Manual and manual only, VW citing it as the enthusiast's choice and of course lighter than the dual-clutch alternative. Brakes are little changed from standard, with only upgraded pads at each corner and thicker front discs. The Brembo upgrade used on the Leon isn't offered here. 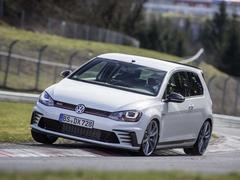 Arguably even more interesting though are the changes you can't see and their contribution to that staggering lap. Handily, both Prof Dr Stefan Gies (VW's Head of Chassis Development) and

(Head of Car Chassis Tuning) are available at the 'ring to talk through the changes. The latter is particularly interesting, notable points in his career including very direct influence over the dynamics of the 997.II GT3, GT3 RS and GT2 RS. And the GT3 RS 4.0. He knows what he's doing, put it that way.

He describes the challenge of a FWD 'ring record car as a "very important task. It's not easy but it is a very nice task." The main issues are of course dealing with the bumps as well as the high speed bends of the Nordschleife, this addressed in the Clubsport S with a 'Nurburgring setting' in the drive profiles; actually it's the Individual preset (featuring alongside Comfort, Normal and Race), but Schebsdat says that's the setting for bumpy race tracks. To that end it makes the DCC adaptive dampers quite supple, which should help in the UK. It sets the engine response, noise and steering to Race also. Gies adds that making it fast on a circuit like Hockenheim would be comparatively easy, but that the car would be so stiff it would be compromised the road. Interestingly, he says that not a lot has been changed to make the Clubsport S fast at the 'ring, but also that this remains an everyday car, albeit with "some compromises." 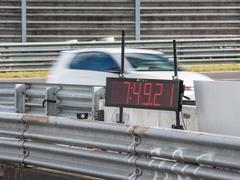 It all passes in a blur

All in the timing

And why are they doing it now? Naturally the 40th anniversary of the GTI is a key factor but, as a man who considers the 'ring his local track, Gies has some personal ambition here too. "I want to be able as VW to give the customers who want to go on track a VW, and not an OPC car or Megane or anything else," he says, firmly. "When I look at the tourist days, I see a lot of competitors and we would like to see more of our cars. I hope with this kind of car I will see this."

So what are those buyers in for? Well once the track has dried out, there's a passenger lap with Benny Leuchter too; it's not close to 7min 49sec, but there's enough to get some impressions. The damping, as suggested, stands out as excellent. It's plenty absorbent enough in compression, taking the very worst the kerbs can do, but also supremely controlled in rebound, meaning the driver can jump straight back on the power knowing that the wheels are on the ground. Through Hatzenbach in particular, Leuchter's style is similar to that of Tommi Makinen's in that Impreza lap, hammering over kerbs as fast he dares. Unconventional, yes, but it is fast! 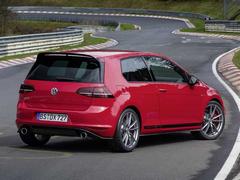 And here's the one you can buy!

Elsewhere the geometry changes have aimed to make the S more neutral, without any time-sapping oversteer into and through the quicker bends. And despite the best attempts of the coldest, greasiest section in the forest, the Golf did seem fairly predictable in its behaviour. Combining those Michelin tyres with additional negative camber at the front appears to make for an incredibly sharp turn in too. Should you wish to put all that to the test, VW says the ESC can be fully disabled, which isn't possible in the standard GTI.

Out of the hot SEAT
Out of corners it behaves much like a Sub8 Leon, albeit with seemingly even less delay between throttle application and tarmac being consumed. The understeer before the VAQ diff is fully active remains, but its window seems smaller than ever before. And even compared to a very potent SEAT, it feels noticeably quicker. Sounds great, too, all angry turbo whooshes and exhaust blare.

Debate will continue as to the validity of 'ring times and the playing field on which they're judged, but there seems little doubt the GTI Clubsport S is going to be some hot hatch. Hopefully this will be the car to appease those for whom the Edition 40 didn't really appear a fitting celebration of the GTI's big birthday. VW will make 400, with the UK expected to be the biggest market. The three original Golf GTI colours will be offered: Tornado Red, Pure White and Deep Black Pearl Effect. As for a price, the final figure is still being settled on we're told; but given that a Clubsport can easily nudge £35,000 with the right options, is it ridiculous to think the real Edition 40 car could be £40,000?